What 2020 Has Taught Us About the Denver Broncos

In a season that saw the Denver Broncos bottomed out as last in the AFC West, going 4-11 missing the postseason for the fifth consecutive season. Longtime Broncos quarterback and General Manager John Elway has stepped down from his position of GM after serving 10 seasons with the Broncos. Elway will remain President of Operations for the Broncos. Leaving the GM job open for Elway and Head Coach Vic Fangio to choose this offseason. This marks a new era for the Denver Broncos. 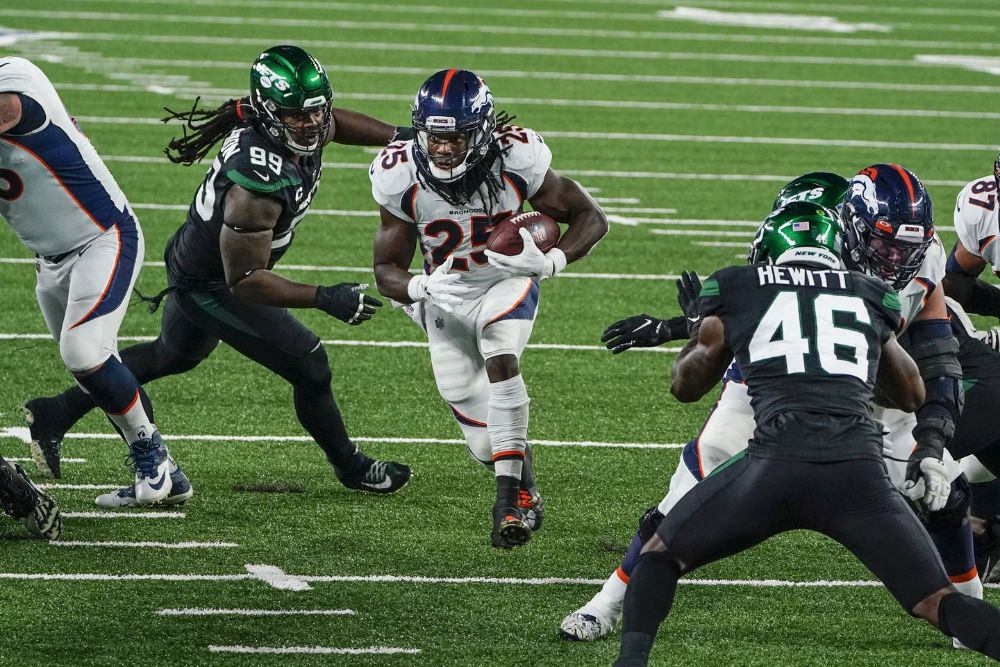 In each of his first two seasons with the Broncos coach Fangio has started out winless going 0-4 in 2019, worst in franchise history since 1999. Fangio’s Broncos began 2020 going 0-3, just like his first season. One questionable game brought a lot of blame on Fangio for this late-game management against the Tennessee Titans in the season opener. After not calling timeouts in the final moments of the game while down late. Making playoff possibilities less and less likely as the Broncos have not made the playoffs since their Super Bowl 50 run in 2015 with Peyton Manning.

The Denver Broncos’ season didn’t start off on the right foot. After star Linebacker, Von Miller dislocated his peroneal tendon in non-contact practice before the first game sidelining him for the entire season. A huge loss for the defense, especially because Denver lost linebacker Bradley Chubb early in the 2019 season with a torn ACL. The combination of Chubb and Miller was highly anticipated for Broncos fans coming into the season but came to no avail. The Broncos began the season without Von Miller and without rookie wideout K. J. Hamler. By week 2, Running Back Phillip Lindsay was out with a toe injury putting him out until week 6. Then number one Wide Receiver Courtland Sutton suffered a torn ACL placing him on IR for the rest of the season. Quarterback Drew Lock would injure his shoulder in that same game, sidelining him until week 5. Number one Cornerback A. J. Bouye would be out until week 6 after the Titans season opener. Then in week 3 Defensive Lineman, Jurrell Casey would be injured for the rest of the season.

Injuries plagued the Denver Broncos not giving the team much of a chance. The Broncos lost their first two games by a combined seven points despite their losses on both sides of the ball. The Broncos would face Tom Brady’s Tampa Bay Buccaneers, which ended in a 10-to-28 loss at home. The Broncos reached their first victory finally in week 4 against the then winless New York Jets in the meadowlands. The Broncos must get off to a good start in 2021 to even be playoff contenders, something Fangio needs to turn around as his role with the Broncos has yet to be proven successful. 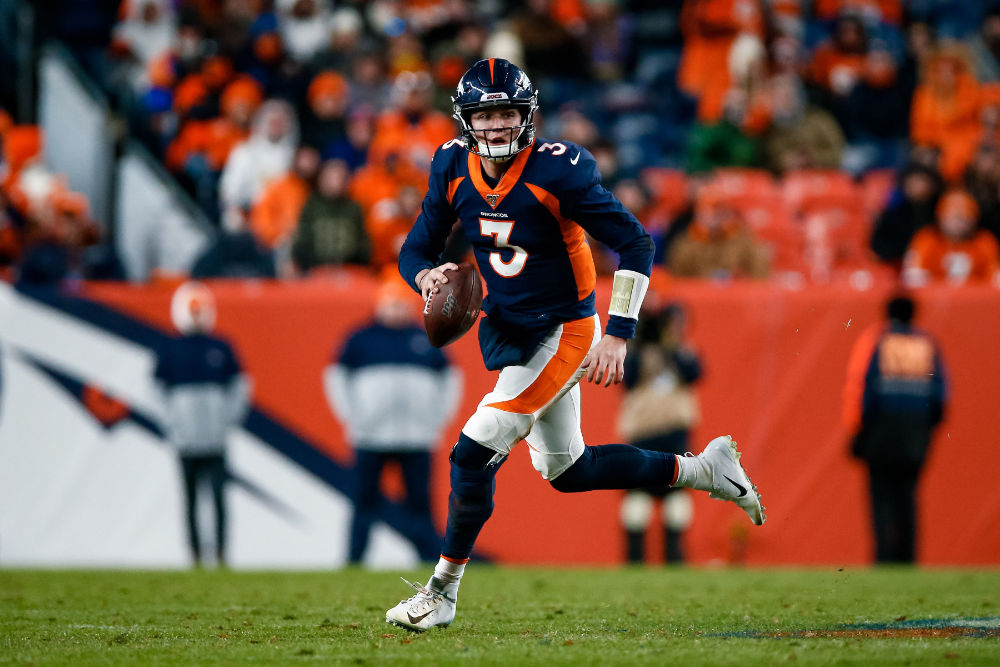 In the 2019 season, NFL fans got a preview of Drew Lock’s potential. As a rookie, Lock led the Broncos to a 4-1 record as a starter and turned around the 3-8 Broncos to a 7-9 record. Their only loss coming to the eventual Super Bowl Champions Kansas City Chiefs. In those five games, Lock threw for 7 touchdowns, 1,020 yards with only 3 interceptions. Lock even led the Broncos to an electric comeback victory over the Los Angeles Chargers in his first start. Bringing a lot of hype surrounding the Broncos in the 2020 season.

Unfortunately, that same success did not carry over into 2020. Drew Lock finished 4-9 as a starter for the Broncos, leading the league in interceptions thrown alongside Philadelphia Eagles Quarterback Carson Wentz with 15 total picks. Lock also finished with the 2nd most turnovers of any player in 2020 tied with 18 total turnovers. Tying Minnesota Vikings Quarterback Kirk Cousins and only one turnover behind the league leader Wentz. Lock would finish with 16 passing touchdowns, which would rank him 20th amongst all Quarterbacks in 2020. As the Broncos would lead the NFL in 2020 with an abysmal 32 turnovers, meaning Lock was responsible for 18 of those 32 turnovers. Six of those 15 interceptions would end up being returned for a touchdown, leading the league with the most pick-sixes.

Throughout the season, Lock would make poor decisions, often going for the long bombs on plays rather than throwing it shorter to a more open receiver. In a very similar situation, Wentz has fallen into trying to play what is called “hero ball” rather than hitting the easy plays. The Broncos suffered an inability to score touchdowns in the red zone this season, which did not help Lock’s case. Inconsistent Quarterback play has bugged the Broncos since the retirement of Peyton Manning and the Broncos are hoping for a turnaround with Lock. A huge step in the right direction is health, Lock had times throughout the season where he missed his top targets like Courtland Sutton, Noah Fant, and K. J. Hamler. But also gave way to an emerging deep ball threat in Tim Patrick that the Broncos would discover his talent this season.

Despite a rough second year, Lock still had good games showing his true potential much like he performed in his rookie season. In week 8, Lock led another fiery comeback against the Los Angeles Chargers, storming back from a 21-point deficit at halftime to claim a 31-30 victory. In which Lock went 26-for-41 with 248 passing yards, three passing touchdowns, and only one interception, hitting rookie K. J. Hamler for the game-winning touchdown pass. Then, in week 14, Lock had arguably his best game as a pro in a 32-27 victory over the Carolina Panthers on the road. Lock would go on to throw 21-for-27 for 4 touchdowns, 280 passing yards, and zero interceptions. There have been flashes of greatness from Lock; it has to be more consistent, the Broncos feel like they have found a good fit in Offensive Coordinator Pat Shurmur and Lock. As the Broncos plan to keep Shurmur for his second consecutive season in Denver. John Elway has remained confident in Lock, as Elway does not plan to draft a quarterback early in the 2021 NFL Draft. In the upcoming season, Lock has to prove himself as a franchise Quarterback for Denver while the door is still open. 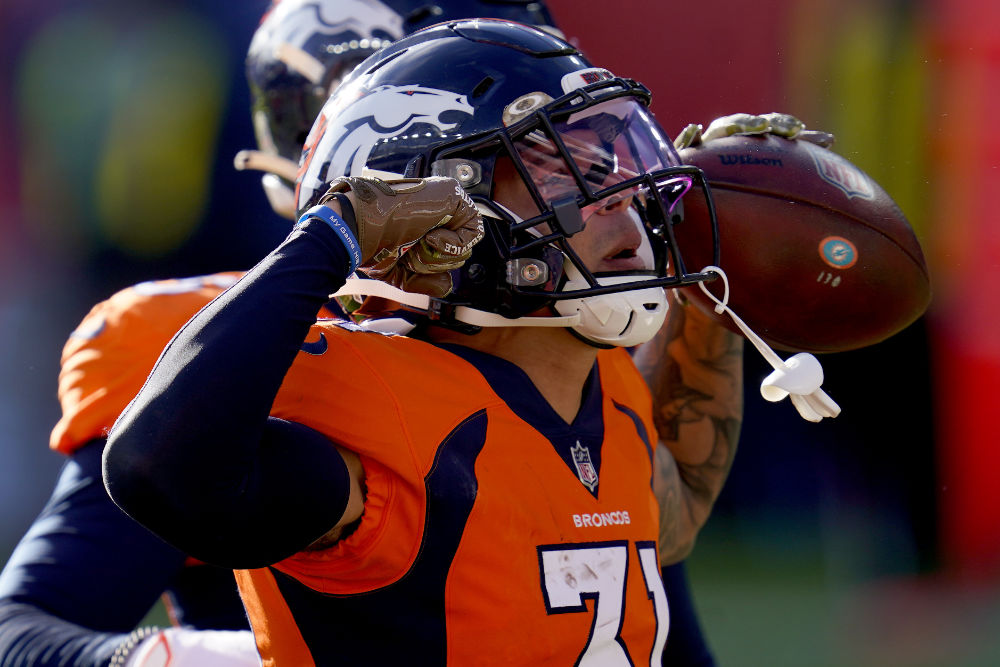 Justin Simmons is Still Worth the Money

Fresh off of a 2019 season, in which Justin Simmons was awarded an All-Pro nomination. The Denver Broncos franchise-tagged Simmons for another season with the team. Simmons earned his first Pro-Bowl nod for this season and likely another All-Pro nomination. As Simmons recorded the 2nd most interceptions this year by a safety with five total for the season. Simmons also finished top 15 in the league with solo tackles and completions allowed amongst all safeties. Coming into the 2021 season, Simmons will be 27 years old. Each season Simmons has proven himself better and better. Simmons is a keeper for sure, the Broncos need to reach out this offseason and pay the man! 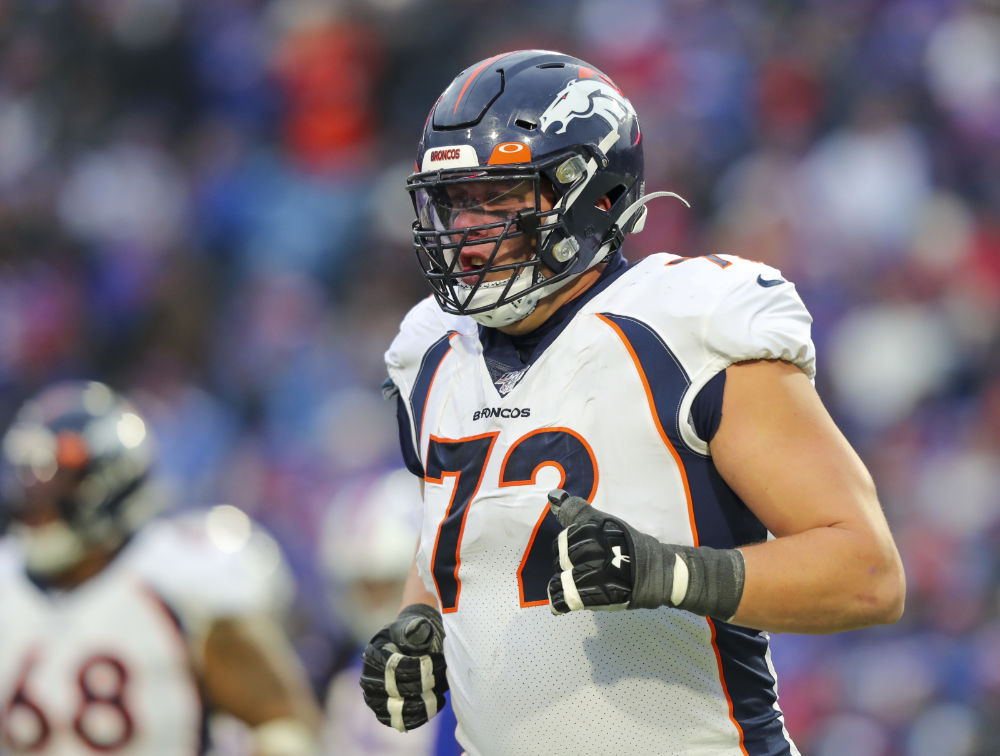 Better late than never, first-round draft choice by the Broncos in 2017 Garett Bolles has struggled in his first few seasons. Problems with health and penalties have struck Bolles early in his career. However, in 2020 Bolles finished the season as one of the best Tackles in the league. Not giving up a single sack all season on 1,015 total offensive snaps, an impressive feat. There was speculation on the Broncos moving on with Bolles in the offseason, Bolles has proven himself worthy to stay in Denver. Pro Football Focus ranked Bolles as the 3rd best Tackle in all of football for the 2020 season. A bright spot in the offense and a huge turn around for Bolles. 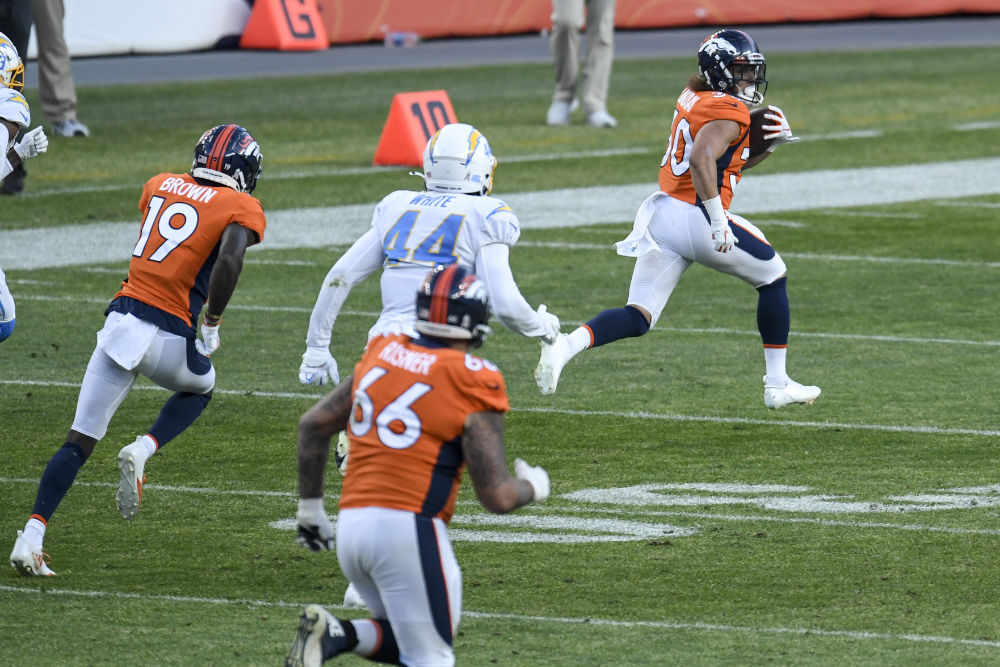 One of the Broncos' most talked about offseason pick-up was Cornerback A. J. Bouye from Jacksonville. The former All-Pro did not live up to the expectation the Broncos were hoping for as Bouye battled with injuries all season long. Bouye would end up only starting seven games in 2020, with that Cornerback Bryce Callahan stepped up to become the Broncos most productive Corner. With Bouye being suspended for the first two games of the 2021 season for violating the league’s drug policy and having a massive $26-million-dollar guaranteed contract, do the Broncos move Bouye this offseason? Callahan has proven to be more reliable than Bouye. The Broncos should explore their possibilities in moving Bouye.

Another discussion topic that has been surfacing around the internet is the Broncos reaching out and getting longtime Lions Quarterback Matthew Stafford. Rumors are swirling around about the Lions moving on from Stafford after 12 seasons serving Detroit. As the struggling Lock might benefit from the use of veteran guidance from week to week. Stafford had a solid season in 2020, throwing over 4,000 yards, 25 touchdowns, and only 10 interceptions. Though Stafford is a great Quarterback and could likely benefit the Broncos, I doubt the Broncos will make an attempt to get Stafford if the Lions are asking for a lot. As John Elway stated he is not planning on drafting a Quarterback early, I believe going out and getting another starting Quarterback would be unlikely. The Denver Broncos should consider the idea though, especially if the right opportunity arises.
Another Broncos newcomer, Melvin Gordon, debuted his first season in Denver with mixed results. Gordon played all but one game for Denver this season, playing more in Phillip Lindsay’s absence throughout the season. Gordon tied for the 9th most rushing touchdowns in the league with nine for the season alongside 986 rushing yards which is the league's 9th best. On the flip side, Gordon tied for the 3rd most fumbles lost this season with four fumbles. An up and down year for Gordon, the Broncos having Lindsay knocking on the door without a contract guaranteed for the upcoming season with the Broncos.

The undrafted hometown Running Back posted two back-to-back with 1,000 yard rushing seasons in 2018 and 2019 as Denver’s number one Back. Despite battling through injuries, Lindsay still ran for over 500 rushing yards and two total touchdowns in 11 games played. Though Gordon had more rushing yards for the Broncos, Lindsay was the spark plug for the Broncos offense when stalling on multiple drives. Lindsay was the spark plug in multiple games including against the Chargers in their comeback victory, also in a Week 6 victory in New England, and Lindsay served as the only bright spot in week 7 against the visiting Kansas City Chiefs.

Melvin Gordon and Phillip Lindsay are both great Running Backs. The Broncos should definitely keep Lindsay as he has been an explosive weapon in his first three seasons. Even though Denver has Gordon, Lindsay holds an NFL record for the most rushing yards in a career without a fumble. In three seasons Lindsay has rushed for 2,550 yards without a single fumble, something Gordon could not touch. Lindsay is the safer option and the greater rusher, when healthy he’s often the best offensive player for the Broncos.

The Denver Broncos are talent-wise, capable of reaching the postseason. The potential is definitely there, it is a matter of staying healthy and getting off to a good start. The Broncos offense has to capitalize on red zone opportunities and not rely on Brandon McManus’ leg so much to put up points. Improvement on cutting down on the turnovers offensively is a must, giving up the ball wears out the defense and makes it nearly impossible to win close games. Drew Lock has to improve on his decision making in order to keep his job with the Broncos. Lock has to prove himself as a true NFL Quarterback and no longer just a college star looking for a spot in the league. Vic Fangio has to turn things around soon because he’ll be on the hot seat if the Broncos cannot see success.