Since it’s inception, Twitter has become the perfect tool to allow fans unfiltered access to the lives of today’s NHL players.

Before, the best fans could hope for was watching their favorite stars during a game and maybe hearing a brief, cliché-filled interview in between periods. Now, Twitter offers access like never before into the world of professional athletes.

The exhilaration of stepping out onto the ice at the Cotton Bowl to be greeted by 83,000 fans for the Winter Classic. The ups and downs of an 82-game regular season. Balancing the demands of the sport with the requirements of a new young family at home. Chirping your opponent, the fans, or your teammates in between games. This is why Twitter is now the preferred outlet for players to connect with their fans.

Here are the Top 5 Active NHL Player Twitter Accounts you should be following. 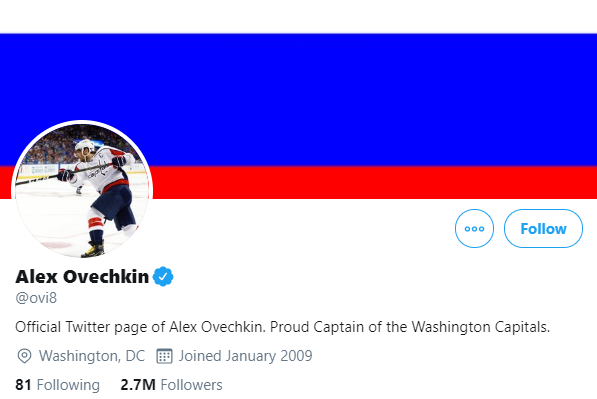 This Russian known as the ‘Great 8’ took the 2018 Stanley Cup celebrations to a whole new level, and if you followed him on Twitter, you had a front-row seat. As the Captain of the Washington Capitals, Ovechkin was the first to hoist the Cup on the ice in Las Vegas and judging by his Twitter posts, Ovi never let go of Lord Stanley the entire summer. From partying around the casinos and night clubs of Vegas, keg stands at the Georgetown Waterfront before jumping in a fountain shirtless, to living like the Russian gangster he is in his homeland, future captains of Cup-winning teams have big shoes to fill. He also has no problem laughing at himself, participating in #TweetlikeOviDay where fans sent in tweets mimicking Ovi’s distinct text style.

Notable Tweet: ‘this game will be gr8!!! think best part is me in fountains’ 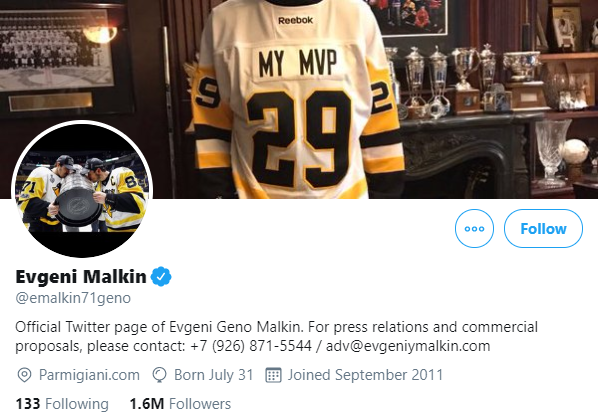 Taking the second spot is another Russian with an insane scoring touch, Pittsburgh Penguin Superstar, Evangi Malkin. Though he plays on the same team as arguably the best player in the game, Sidney Crosby, (who doesn’t have a Twitter account) Malkin has never been one to take a back seat. Winner of the Calder, Hart, Conn Smythe, Art Ross, Ted Lindsay, and 3-time Stanley Cup Champion, Malkin wins Twitter as often as he wins on the ice. From encouraging fans and their bosses to stop working for the day to photoshopping his head onto football players, posing with an armful of puppies, or wearing the IIHF World Championship trophy as a hat, Malkin brings his magic touch to Twitter every time out. 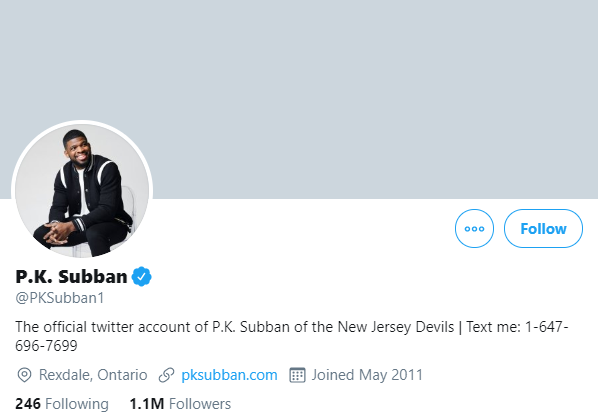 Stanley Cup Champion, Olympic Gold Medalist, Norris Trophy Winner, and future Mr. Lindsey Vonn, PK knows the value of his Twitter game. As the first active, Canadian-born NHL player to reach 1,000,000 followers, Subban doesn’t disappoint. While many NHLers play it safe online, PK displays his willingness to step outside the box. From his eccentric clothing style to taking followers on a tour of Times Square to bring in the new year, Subban embraces the rockstar lifestyle of a professional athlete. PK also uses the platform to highlight the various charitable causes he’s a part of, including a $10 million donation made to the Montreal Children’s Hospital. 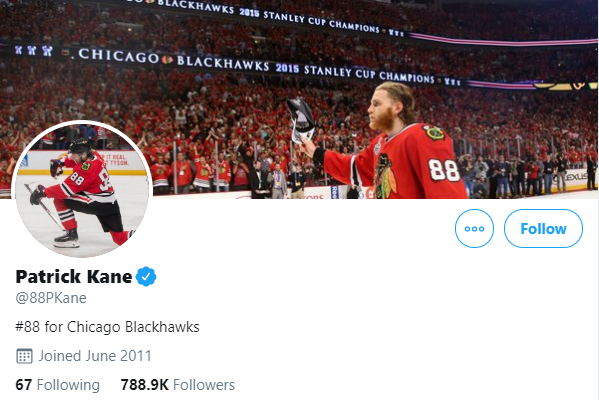 3-time Stanley Cup Champion, Patrick Kane is the first American-born winner of the Hart and the Art Ross Trophy. Not only is Kane a world-class player, but he’s also a world-class partier. As perhaps the most recognizable American star in the league, Twitter is filled with pictures of fans partying with Kane. Shirtless in limos, pounding beers at Cup parties, Kane embraced the Chicago superstar athlete lifestyle at every turn. After a few drunken incidents, Kane must have realized his importance to the game and has tamed down his off-ice game considerably. He still knows how to have fun as seen in this Twitter burn on teammate, Jonathan Toews who asked why Kane wasn’t one of his 236 K followers… 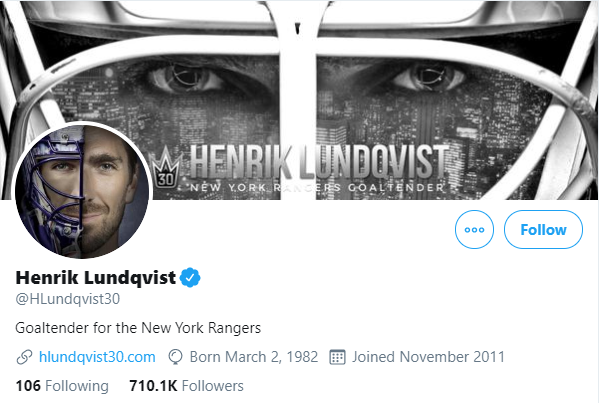 Holding the record for the most wins by a European-born goaltender, ‘King Henrik’ is cool, calm, and collected both on and off the ice. In 2006 he was named one of People’s World’s 100 Most Beautiful People and holds the unofficial title as the ‘best-dressed player in the NHL. This trendsetting tender brings his flair to Twitter and was rocking European-cut designer suits, skinny jeans and velvet shoes, years before they became fashionable with the rest of North America. Henrik is also an accomplished guitar player, once playing “Sweet Child O’ Mine” with The Roots on Late Night with Jimmy Fallon, playing in a rock band with John McEnroe, and with his band Box Play. Whether it’s fashion, music, NHL life, or King Henrik living his life in New York, and is worthy of his 710 K followers.

Notable Tweet: ‘Dear eight-year-old Henrik, you’re in for one hell of a ride.’

While ‘Phil the Thrill’ doesn’t pull the number like our top 5, he is still worth a follow. His receding hairline and chubby build scream Amazon Fulfillment Center worker so most people would never guess that this American-born winger is an absolute superstar in the world of professional hockey. Known for his love of hotdogs and the leaked photos of his strange, single-seat theatre room in his Pennsylvania mansion, it’s hard to not root for everyman Phil. Despite his impressive statistics, The Thrill was left off Team USA at the 2016 World Cup of Hockey roster, which led to his infamous tweet trolling Team USA after they were eliminated in a 4-2 loss to Team Canada.

Notable Tweet: ‘Just sitting around the house tonight with my dog. Felt like I should be doing something important but couldn’t put my finger on it.’

While our favorite NHL stars don’t Tweet as often as we like (or never, like Sid Crosby) the next crop of future NHL stars are well-versed in the value that an active social media can to their brand. It’s safe to say the future of NHL Twitter looks bright.

Michael is from Saskatchewan, Canada and is interested in all things hockey and boxing.