Eli Manning was drafted first overall in the 2004 NFL Draft by the San Diego Chargers. Manning was traded to the New York Giants for second overall pick Quarterback Phillip Rivers on draft day. Eli Manning entered the season as a backup behind Super Bowl-winning Quarterback Kurt Warner. Eventually, the Giants handed the keys to the 23-year-old Eli
Manning. Making his first career start against the Atlanta Falcons in week 11 of the 2004 season. Manning started for the remainder of his rookie season finishing with 1,043 passing yards, six touchdowns, and nine interceptions. 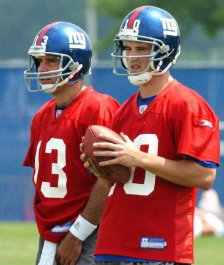 In the 2005 season, Eli Manning started all 16 regular-season games. The Giants started the season 2-0 with victories over the Cardinals and Saints. In week 7, Manning led the Giants to victory on the last-minute drive to defeat the Denver Broncos 24-23. Eli Manning improved the team to an 11-5 record. Winning the NFC East division and earning the fourth seed in the Playoffs. Manning finished with 24 touchdowns, 3,726 passing yards, and 17 interceptions. 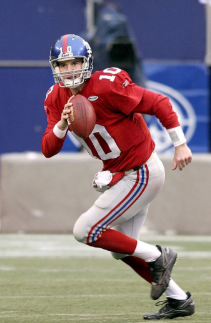 Opening the 2007 season the Giants started with 0-2 record. By week 7 the team improved to 5-2 winning five straight games. In week 8, the New York Giants faced off against the Miami Dolphins. Playing in London’s Wembley Stadium Manning scored the team’s touchdown. A 10-yard run for a touchdown, making it the first touchdown in NFL regular-season history to be scored outside of North America. The Giants would go on to defeat the Dolphins 13-10. Eli Manning would finish the year with 23 touchdowns, 3,336 passing yards, and 20 interceptions.

The New York Giants entered the playoffs with the 5th seed in the NFC. Playing the Tampa Bay Buccaneers in the Wild Card Round. Manning finished the game with a pair of touchdowns and a 24-14 win on the road. In the Divisional Round, the Giants were facing the top-seeded and NFC East rival the Dallas Cowboys. Manning threw for two touchdowns and zero interceptions in an upset victory over the Cowboys. Reaching the NFC Championship game against Brett Favre led Green Bay Packers. The New York Giants went on to beat the Packers in overtime.

With that victory, the Giants were onto to Super Bowl XLII where they met the undefeated New England Patriots. Eli Manning led the Giants offense on a game-winning drive. In which, Manning escaped the pocket without being sacked and launched it to David Tyree. Tyree caught it with his helmet on the Giants’ 44-yard line. A few plays later Manning connected with receiver Plaxico Burress for a touchdown to secure a Giants Super Bowl win. That famous drive is known as one of the greatest Super Bowl moments ever “the helmet catch.” Manning was named Most Valuable Player of Super Bowl XLII. 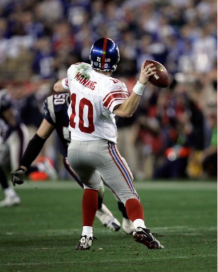 To start the 2008 season the defending champion New York Giants came out the gate strong with a great 6-1 record. Manning continued to lead the team to more victories. Playing at a high level and because of his effort, he was named NFC Offensive Player of the Month in November. For the month, Manning threw for 1,036 yards, ten touchdowns and accumulated a 94.9 passer rating leading to team to a 5-0 record in November. The following month Eli Manning was named to his first Pro Bowl selection.
Manning’s totals for the 2008 season were 21 touchdowns, 3,238
passing yards and 10 interceptions. As well as an NFC East title and the number one seed entering the postseason. In the Divisional Round the
Giants faced their rival the Philadelphia Eagles. Manning struggled and the Giants lost 24-11 to the underdog Eagles. 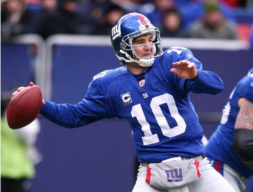 After just falling short of the playoffs in 2009 and 2010 Manning focused on improving as a player. The Giants opened the season with a 28-14 loss to the rival Washington Redskins. However, the Giants would on and win six of their next 7 games. Including a win over the New England Patriots in where Manning led the team to a 24-20 comeback victory. Pushing the New York Giants to a 6-2 record. The Giants would go on and lose the next four games and possibly missing out on the playoffs. However,
the Giants went on to win three of their last four games including a win over the division rival Dallas Cowboys, sweeping them for the season. With an impressive turnaround, the Giants won the NFC East title and earned a spot in the playoffs. Eli Manning finished the
2011 season off with 29 touchdowns, 4,933 passing yards, and 16 interceptions. A much improved Eli earned a Pro Bowl nomination for his second time in his career.

The Giants entered the playoffs as the lowest seed with the worst record of any NFC playoff team. In the Wild Card Round, the Giants had no trouble winning defeating the Falcons 24-2. The following game the Giants matched up against the defending Super Bowl champions and number one seeded Green Bay Packers in the Divisional Round. In which, Eli Manning threw for three touchdowns and only one interception to upset the Packers. Reaching the NFC Championship the Giants would face a team they lost to in the regular season the San Francisco 49ers. Despite being sacked six times Eli Manning went on to pass for 316 yards and two touchdowns. Leading the Giants in a 20-17 upset in overtime. Reaching the Super Bowl for the second time in five years. 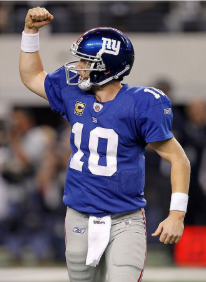 Rematching the Tom Brady led New England Patriots. The New York Giants were once again the underdog despite beating New England in the regular season. Eli Manning put together another game-winning drive. Leading the offense 88 yards down the field to score the game-winning touchdown late in the fourth quarter. The Giants won Super Bowl XLVI defeating the Patriots again. Manning was named Most Valuable Player of Super Bowl XLVI leading the Giants on another incredible championship run. 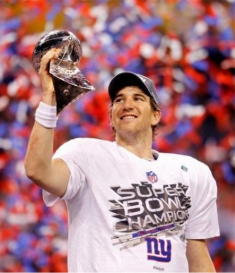 Eli Manning got a new coach in Ben McAdoo entering the 2016 season. After Manning’s longtime head coach Tom Coughlin stepped down. In the season opener, the Giants were on the road against NFC East rival Dallas Cowboys. In which, the Giants won 20-19, Manning threw three touchdowns and one interception for 207 yards. The New York Giants went on to finish the season with an 11-5 record. Reaching the playoffs for the first time since the 2011 season. Eli Manning finished his 13th season with 26 touchdowns, 4,027 passing yards, and 16 interceptions. Manning and company would reach the Wild Card Round where they would face off with the Green Bay Packers. The offense was simply off the mark with multiple drops by star receiver Odell Beckham Jr. and other playmakers. Manning finished the game throwing for 299 yards and a touchdown. The Packers shut down the Giants ending their season. 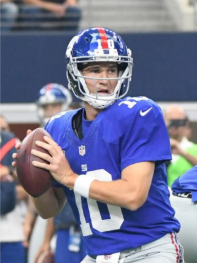 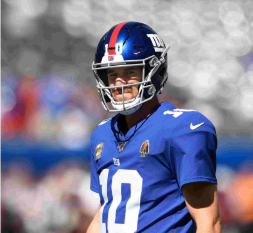 On January 22, 2020, Eli Manning announced his retirement from pro football. The Giants will honor Manning by inducting him into the Giants Ring of Honor and Manning’s number 10 jersey will be retired. 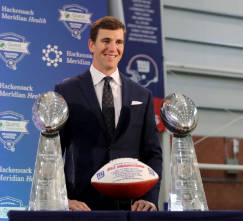 Eli Manning spent his entire career as the quarterback of the New York Giants. All 16 seasons with one incredible team. Not to mention his 210 consecutive starts and 234 games started. Eli Manning was a true Iron Man on the field throughout his entire 16-year career Manning didn’t miss one game due to injury. Eli Manning should be credited as one of the toughest players of all-time playing through countless injuries.

Eli Manning holds every major passing record in Giants history. He’s the greatest quarterback to ever play for the Giants. Pro Football Reference has Manning ranked as the second greatest Giant of all-time. Manning accumulated 117 regular-season wins. As the quarterback of the Giants, he led them to the playoffs six times with a career record of 8-4 in the postseason. Also, three NFC East titles and two Super Bowl championships. Eli Manning is one of the few players to ever win the Super Bowl and Super Bowl MVP more than once. Manning is amongst the top seven in 6 major quarterback categories.

Nobody in the history of the franchise had represented the New York Football Giants better than Eli Manning. Manning is one of the classiest if not the classiest player of all time. He treated every situation with the utmost respect. The way he handled losses, criticism and coaching decisions were nothing less than a true professional. Something to admire about Eli Manning’s career. He has nothing bad to say about anyone. You’ll never see Eli Manning ranting about another player or coach to the media. It’s very impressive especially playing in the New York market for so long that just goes to show the character and leadership he has. Also, his off the fieldwork in the community. Volunteering for Hurricane Katrina relief in his hometown of New Orleans. As well as his children’s clinic in Mississippi. All of his community service over his career earned him the Walter Payton Man of the Year in 2016. Eli Manning is one of the most highly respected players in the NFL. He has gained respect all across the league and from many other professional athletes.

The impact that Eli Manning had on the league cannot go unnoticed, he is one of the great quarterbacks of this generation. To say that he’s just going to get into the Hall of Fame because of his family’s name is not true it all. The Manning family is loved but that’s not the only reason why he’d qualify. Eli Manning was a spectacular quarterback beating the greatest quarterback of all-time Tom Brady twice in the Super Bowl is just amazing. Also, to his consistency and his devotion to the New York Giants. Eli Manning has Hall of Fame stats to back him up by itself. His off the fieldwork will be acknowledged too when his time comes. Next stop Canton! 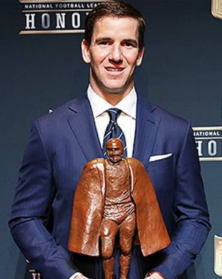 Thank you, Eli Manning, for all the wonderful memories. Eli Manning was my first favorite player when I was 8 years old. I remember watching the Giants playoff run with my Grandfather Van, who’s also a Manning fan. When they beat the Packers, Niners and the Patriots in the Super Bowl. I became a devoted fan of Eli Manning and the Giants. I’ve been following them ever since. As I kid I remember getting his jersey for Christmas.
Reading books about him, collecting trading cards, I had posters and I’d always use him in the Madden video games. It hasn’t always been easy being a Giants fan but I love supporting Eli and the New York Football Giants. Eli Manning is my guy and he’s a Hall of Fame quarterback. Enjoy retirement Eli!