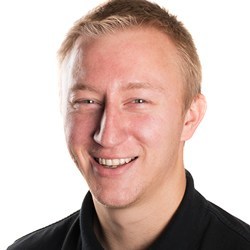 I grew up playing many different sports with my neighborhood friends, mostly football and basketball. My two next-door neighbors had connecting driveways, minus a two-foot grass patch we would dribble over and consider our half-court mark. We would play throughout the day, rain or shine. We would plug in large shop lights and stand them up on the hood of parked cars to light the court. I lived on a corner lot and happened to have the longest yard on our street, so everybody would come over for some rather large pick-up football games. We would use landmarks for the endzones; a massive pine tree on one end and the front porch on the other. The weather never stopped us from getting a game going.

This is where my passion for sports began.

Aside from pick-up games outside, I did play t-ball, indoor soccer, and a little flag football. I also played YMCA basketball every year up until sixth or seventh grade until I could try out for the eighth-grade team at my middle school. I made the team and went on to play ninth grade as well. I wish I was able to balance high school basketball with my grades, but as I started to struggle, I was worried about my goal of going to college getting compromised. So I decided not to try out for the JV basketball team in my sophomore year.

When I reflect on my participation in sports, I'm amazed by how much these activities helped me grow as a person. Every setting offered new friendships, opportunities for skill development, and revealed and refined innate character traits that define who I am as a person today. For my senior college project, I was inspired by this aspect of sports and developed a concept for a non-profit around the idea.

This same aspect of sports is what built the foundation for this blog. My goal is to gather stories that paint a picture of humanity within sports to "bring sports back to life." Join me on my journey - see what it takes to become a contributor today!