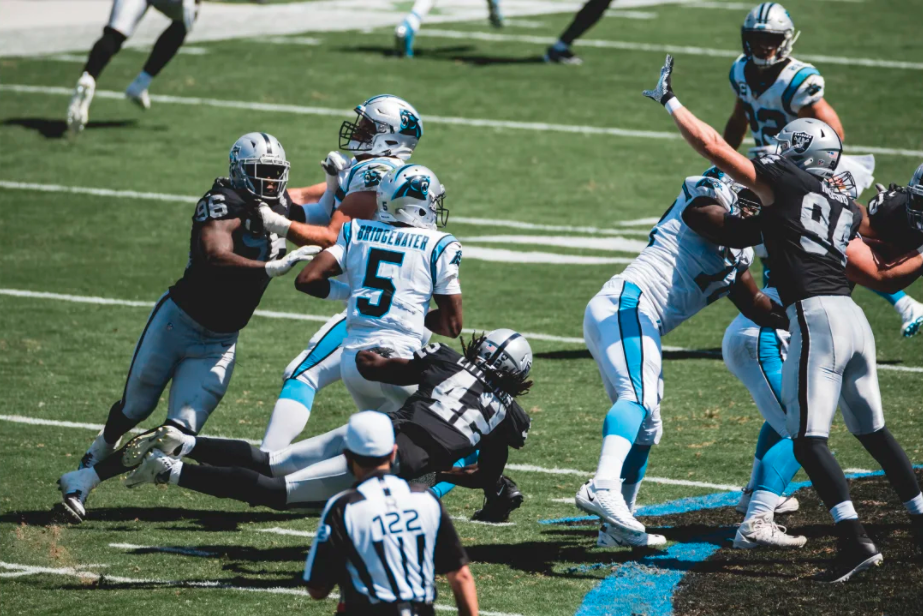 To start the game, Carolina kicked to Las Vegas to begin the 2020 NFL season for both teams. Raiders failed to pick up a first down on their first drive going three and out, punting early. Once Carolina got the ball, quarterback Teddy Bridgewater went to work starting out the game throwing 2-for-2 across the middle attacking the Raider defense. But after struggling to get much on the ground with McCaffrey and a D. J. Moore dropped a pass, Carolina had to kick a field goal. Going up 0-3 to start out the season.

Following a Carolina score, the Raiders began attacking the defense with their running game. Derek Carr threw a 45-yard bomb across the middle to rookie receiver Henry Ruggs III to set up a one-yard touchdown run by Josh Jacobs. Giving the Raiders a 7-3 lead in the first quarter. A complete 180 from the previous possession. Once Carolina got the ball back, they hit the ground running. With a comfortable Bridgewater under center making plays, making way for great Christian McCaffrey runs. Capitalizing on the momentum, McCaffrey ran for a touchdown, after a missed field goal Carolina would lead 7-9 in the first. 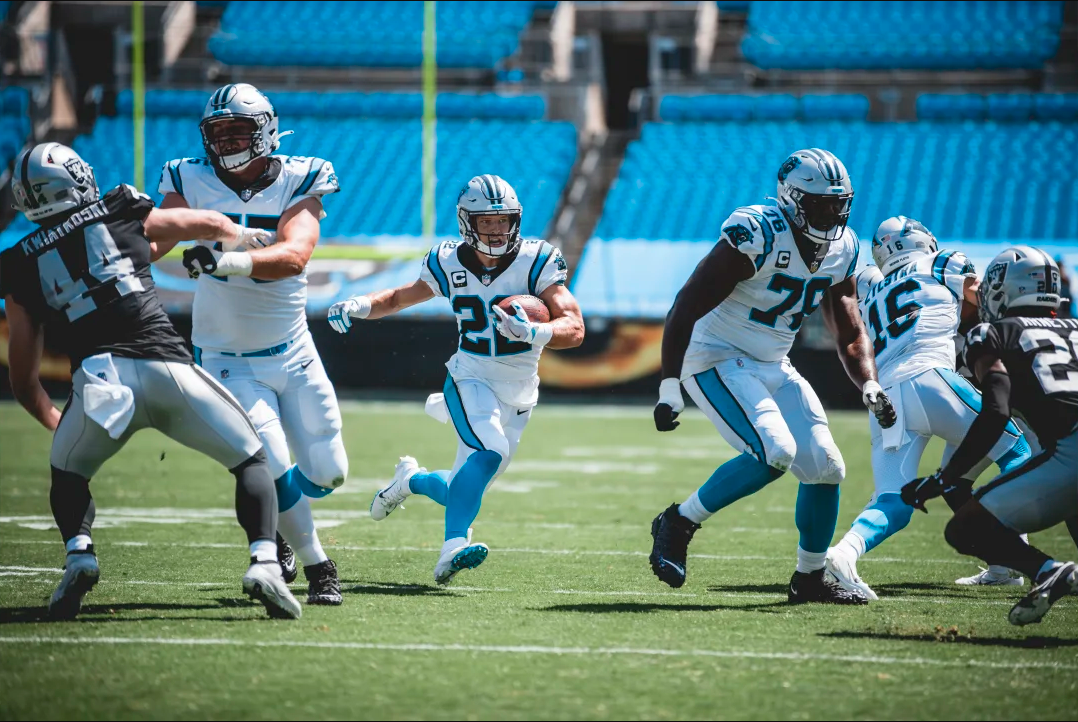 In response to a Raiders’ score, Carolina moved the ball down the field. After a Las Vegas pass interference call put Carolina in great field position. Bridgewater moved out of the pocket to create a first down run through the middle of the field while avoiding a sack. But after a missed pass or two Carolina had to settle for a 46-yard field goal, with a 10-12 Panthers lead.

Late in the second quarter, the Raiders were moving down the field. Using their rookie Ruggs III both on the ground and in the air. Unfortunately, Riggs III suffered an injury that sidelined him for the rest of the game. Despite his loss, the Raiders finished the drive with a beautiful throw from quarterback Derek Carr to Agholor for a 23-yard touchdown. Flipping the lead back to Las Vegas with a 17-12 lead, marking the fifth lead change in just two quarters. The Panthers received the ball with less than two minutes left in the half. Starting out the drive with an explosive first-down run by McCaffrey breaking a tackle to gain a new set of downs. Bridgewater led his squad down the field with multiple first-down throws and a run up the middle in the final seconds of the half. Setting up a 31-yard field goal as they go into halftime down 17-15. 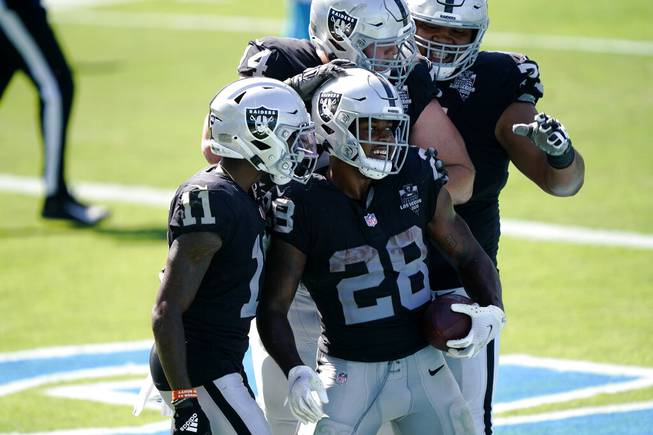 Carolina started their drive at their own ten-yard line after a penalty on the kickoff which led nowhere. Forcing the Panthers to punt the ball to the Raiders, putting the ball in the hands of Hunter Renfrow who had a solid return. Placing Las Vegas in a good field position to open their drive. Carr connected with receivers on multiple occasions, eventually wrapping up the drive with a field goal, pushing their lead to five. After Carolina gave up three points, they struggled to gain a first down punting after only three plays. In which Carr connected with Jacobs for a big gain and a new set of downs. Afterward, a few good runs by Jacobs led to a touchdown between Carr and Jacobs, adding to their lead.

With the Raiders pulling ahead, Carolina needed to answer back. They began running with McCaffrey and he answered with several good rushes. Bridgewater and company drove an incredible 90 yards down the field, starting with giving McCaffrey the rock early. Then a great pass to Moore for 18 yards set the tone for the rest of the drive. Bridgwater connected with receivers for a first down two more times to set up a goal-line pitch to McCaffrey for six points. Closing the gap to 27-22 to finish out the quarter. 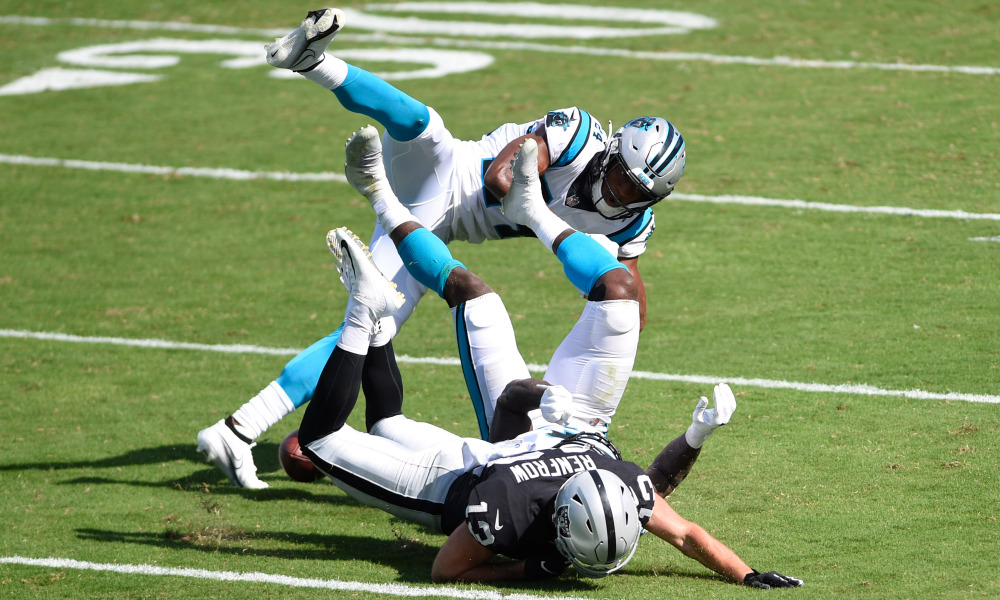 The Panthers’ defense held Las Vegas to just four plays before they punted the ball away. On just the second play of the drive receiver, Robby Anderson burned his defender on a beautiful pass from Bridgewater to score an incredible 75-yard touchdown. No one saw coming. The pair would also connect for two points following the touchdown on the two-point conversion. All of a sudden Carolina is in the driver seat with a late 27-30 lead in the fourth. But Carr would answer back on fire, throwing for two first downs including a pass interference call placing Las Vegas to the Carolina 35, creeping up on the redzone. Finishing the drive with a six-yard touchdown pass to Jacobs to bring the lead back to Las Vegas.

The Panthers would get the ball back with four minutes left trailing 34-30. They would hand it off to McCaffrey four straight plays for 24 rushing yards. Wasting the clock down to the two-minute warning where Carolina was met face to face with a fourth and inches with the game on the line. Carolina would have it off to the fullback instead of McCaffrey falling just short of the first down. Baffling the announcers by the play call of first-year head coach Matt Rhule. Turning the ball over back to Las Vegas, where they would milk the clock and punt the ball back to Carolina with eight seconds remaining. The Carolina offense fell short of a score in the final two plays. With the visiting Las Vegas Raiders pulling out the victory in Charlotte in week one of the new season. 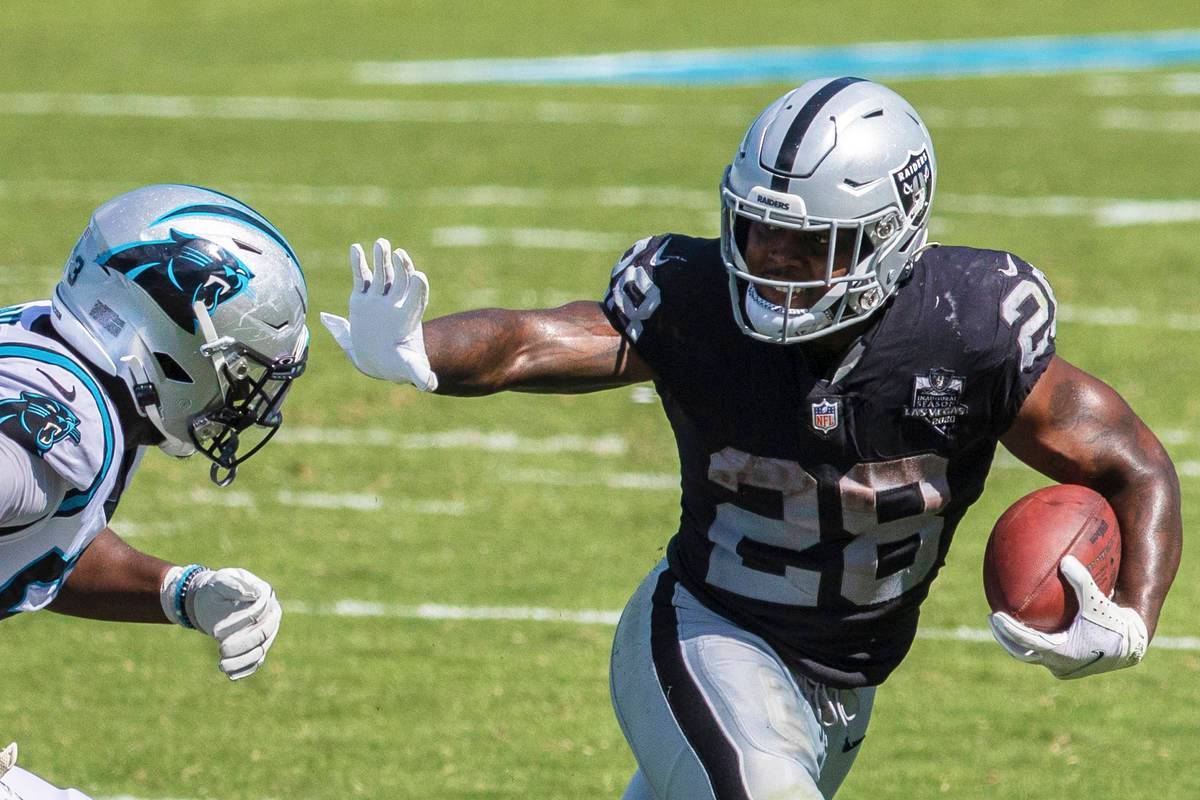 Ultimately, the game came down to the defense. Both offenses were clicking both on the ground and in the air. Neither defenses created a turnover all game. Carolina had zero sacks, and Las Vegas only had one. Both teams didn’t get many penalties besides D. J. Moore’s taunting penalty. It was clean for most of the game. The lack of disruption from either defense made both quarterbacks play loose and comfortably few missed throws by Derek Carr. Two dropped interceptions by the Raiders could’ve been a big momentum swing, but they missed out on. There was little to no rush on Carr in the pocket, Carolina has got to improve in that department. You could tell they were missing Luke Kuechly defensively. The ground control was poor too Josh Jacobs ran all over that Panther defense rushing for 93 yards and three touchdowns.

I was impressed by both quarterbacks, especially with all the pressure these two have. Carr has been on the hot seat off and on for about two years now Carr showed with his performance he’s deserving of that starting spot. Throwing for 239 yards and a touchdown while going 22-for-30 on completions. Now that stat line doesn’t jump off the page or anything but Carr looked poised and definitely showed he’s a seasoned veteran quarterback. As for Teddy B, I was impressed with his play in the first half for sure. He didn’t look nervous at all; he had a missed throw once in the first, and I didn’t see him miss another one for the rest of the half. Just like Carr, Bridgewater played poised even under pressure at moments he would roll out of the pocket and make plays with his feet. He avoided several sacks rushing for two first downs, finishing the game with 26 yards in four carries. I saw him try spinning out of tackles and gaining extra yardage. D. J. Moore had a couple dropped passes, one being a touchdown that would’ve been nice on the stat sheet. Bridgewater finished the game 22-for-34 passing for 270 yards and a touchdown. Under the pressure of Panther fans replacing Cam Newton, Teddy B played well. Bridgewater showed a lot of heart and they are better offensively than I expected.

I believe Robby Anderson was a great addition to the offense, especially with the wide receiver position being such a concern for Carolina for the past few years. Anderson finished with 115 yards, a touchdown, and 6 catches in a great performance. He should be a good sidekick to D. J. Moore, who I was disappointed in, with a drop that hit him in the chest and a slipped pass in the endzone. Moore had 4 catches for 54 yards, which isn’t horrible but could’ve done better. Both Christian McCaffrey and Curtis Samuel did a solid job in the passing game, both finishing with 50 plus yards receiving. As for Las Vegas’, rookie Henry Ruggs III was on pace for a great game before he got hurt early in the game. He started with 55 yards and three catches before leaving the game. Fortunately, both Josh Jacobs and the 6’6” tight end Darren Waller stepped up to help the passing game for the Raiders.

On the ground McCaffrey had 96 yards rushing on 23 carries and two touchdowns. Josh Jacobs had quite the impact as well. As I said, finishing with 93 yards and three touchdowns on 25 carries. Both running backs attacked their opposing defenses, both were breaking tackles and outrunning defenders all game. An impressive performance from the running backs expects this from McCaffrey and Jacobs all season long. These are two special young talents. It wouldn’t surprise me if they both reach 1,000 yards rushing for the season. As both running backs achieved that very mark last season.

The Raiders had an advantage for sure, having Jon Gruden call plays compared to the first-year head coach Matt Rhule from LSU. The late play call for Carolina to hand off the ball to the fullback on the fourth and inches was definitely a head-scratcher. As McCaffrey was unstoppable all game, the defense struggled for Carolina and inexperienced coaching showed. Like all first-year coaches, they grow with time and Carolina surprised me in how well they played. Panther fans should be proud of their head coach and the Raiders should be happy to see Gruden do his thing while adding to the win column.

Carolina impressed me and I see them competing in the NFC as they have a fresh team from years previously. Things are looking good in Charlotte as the coach grows and the players familiarize themselves with one another, they’ll be better than most expected. McCaffrey is going to continue to do his thing. Anderson and Bridgewater look like they could become scary. The defense has got to step up in slowing down the rushers. The secondary played fine, but tackling has to be addressed to the team. Las Vegas proved they have a legitimate offense. With Carr playing calm, Jacobs rushing for three touchdowns and Ruggs III showed plenty of potential. Despite being banged up on both sides of the ball, the Raiders prevailed. It was good to see Johnathan Abram back in action as he missed 15 games last season. The Raiders also have to improve on tackling McCaffrey. He outmuscled a lot of defenders. The Raiders look like they can compete with Denver for that second spot in the AFC West, but we’ll see with time how this team turns out. A good game for both teams, I think fans of both franchises have something to be happy about for this season.