The Broncos Storm Back to Take Victory Over the Bolts

In a first half dominated by the Los Angeles Chargers’ defense, the Broncos' offense was suffocated to just two first downs and 56 yards total. The struggle on offense for Denver this season continued to loom early. With their inability to convert on third downs. They only scored three points in the first half, thanks in part to a Justin Simmons' interception that was returned for 46 yards. Denver’s offense went three-and-out, three times in the first half. The Chargers capitalized scoring two touchdowns thrown by rookie Quarterback Justin Herbert in the second quarter. Los Angeles looked to be in control throughout the entire first half. As the Broncos were booed by the home crowd after a mediocre first half heading into the locker room.

Los Angeles received the ball to start the third quarter and rolled 75 yards down the field to score another touchdown. The score came from a 24-yard touchdown pass in the end zone, nicely thrown by Herbert to Receiver Mike Williams, who snagged it with one hand. Pushing their lead to 18, with a 21-3 score in Denver. The Broncos replied with yet another three-and-out and the Chargers scored three points on their next drive. Taking a 24-3 lead, Denver’s running game had been very weak in the first half with little carries for minimal yards. But, Halfback Phillip Lindsay turned things around for Denver busting open a 55-yard touchdown in a foot race to the end zone. Narrowing the gap to 14 points and giving the Broncos a well-needed charge of momentum on offense.

The Chargers and Broncos shared interceptions late in the third quarter. Quarterback Drew Lock hooked up with rookie Receiver Jerry Jeudy for a huge 43 yard gain. Lock followed up by another first down reception caught by Tight End Noah Fant pushing the Broncos inside the red zone. Resulting in a touchdown pass by Lock pushing the score to 24-17 early in the fourth. The Broncos held the Chargers to a field goal on their next drive and the Broncos answered back quickly, scoring a touchdown on their second play of the drive. Lock’s 40-yard touchdown pass was thrown across the middle to Receiver DeSean Hamilton to close the lead to three. The Chargers chewed the clock running 12 plays for five minutes on the following drive. Linebacker Bradley Chubb wrapped up Herbert for a sack and Safety Kareem Jackson got the third-down stop. Holding the Chargers to their third field goal, putting the Chargers up 30-24 but still leaving a chance for Denver to win.

With 2:30 remaining in the game Denver had to drive 81 yards, Lock hooked up with several receivers to reach the Chargers 18 yard line. A spike to kill the clock with only 13 seconds left in the game. Lock failed to connect with Hamilton on a deep pass, leaving Denver with a fourth-and-four with seven seconds remaining. The next play Lock launched the ball to the back of the end zone but fell incomplete with one second remaining, but the Chargers were called with a pass interference call. Placing Denver in the one-yard line with a second remaining in the game. With the game on the line, Lock rolled out of the pocket and extended the play, and hit the rookie receiver, K. J. Hamler, for a touchdown along the sideline. Miraculously tying the game 30-30 with no time remaining. A Brandon McManus PAT sent Denver with a 31-30 victory over the division rival Chargers. Improving Denver’s record to 3-4 and third spot in the AFC West. 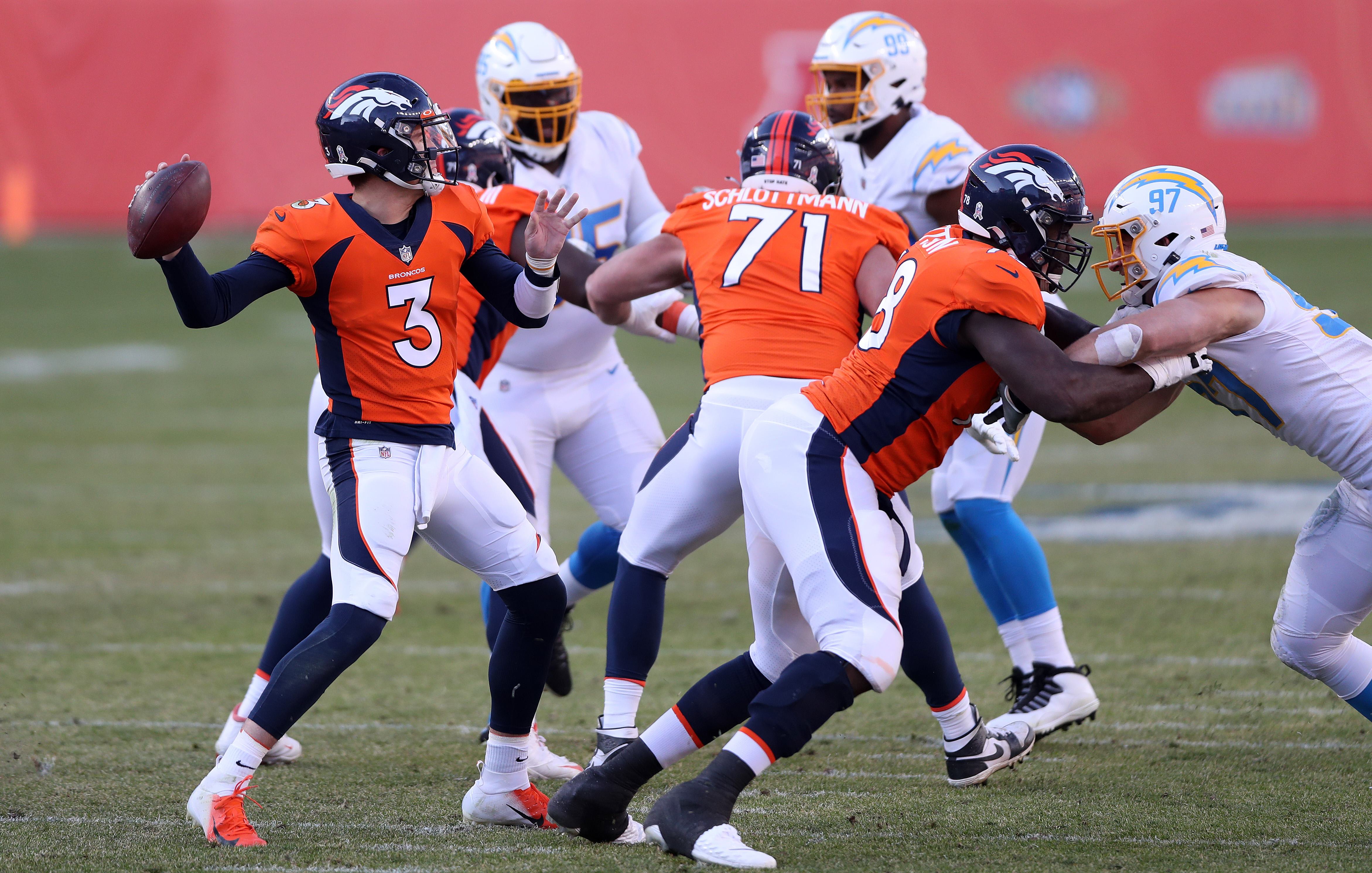 This is the Broncos' first 21 point comeback since 2012 when they came back by 24 points at halftime ironically against the Chargers in San Diego. Led by Quarterback Peyton Manning in his first year in Denver. This also Drew Lock’s second time leading Denver on a game-winning drive over the Chargers. The last time was in week 13 in a thrilling 20-23 victory. Meaning Lock remains undefeated against the rival Chargers. A much-improved performance by Lock since his play against New England and Kansas City in the previous two games. Lock finished with 248 yards passing, three touchdowns, one interception, and a 94.4 passer rating. Lock’s last touchdown pass was in week one against Tennessee. So, three touchdowns in the air were great because it’s been such a struggle to cash in those passes, especially in the red zone. It was also nice to see the gritty desire to win by Lock near the end, much like last season. Good performance despite missing Tim Patrick, Lock did well with DaeSean Hamilton giving him a breakout game in his replacement.

Phillip Lindsay proves that he’s the superior Running Back for the second week in a row. Leading the Broncos in rushing yards in two back-to-back games on fewer carries. Lindsay is an explosive back that can get the ball downfield and create big plays. Lindsay showed that in this game accumulating 83 rushing yards on six carries with 13.3 yards per carry and a touchdown. As the Broncos start Melvin Gordon over him once again for another week, Gordon has not played as good as Lindsay. Gordon fumbled twice last week against Kansas City and once in week one. The Broncos may have started Gordon because Lindsay was coming off an injury, but I do not expect Gordon to continue to start over Lindsay. Lindsay is the better runner, Gordon is the better receiver, but Lindsay does not fumble as much as Gordon. So, start Lindsay and have Gordon as the second punch with fewer carries.

The Broncos defense continues to keep itself in the game nearly every week. Denver continues to hold teams to field goals and creating turnovers in the air. Justin Simmons caught a perfectly timed interception followed by a great return, and Bryce Callahan got his second interception of the year. Continuously backing Denver up in these close ball games, Denver’s defense held up well and without the secondary stepping up the Broncos would not have had a chance. With Bradley Chubb firing up the defense last game, it showed against the Chargers they were ready to play and not give up. Malik Reed continues to do a great job in replacement for Von Miller, Reed and Chubb got another sack for their second consecutive game. Well done by the defense, despite not having A. J. Bouye in for the entire game.

A 3-4 record does not look great on paper, but Denver has been bothered by injuries all season long on both sides of the ball. The Broncos have a very winnable game next week against Atlanta that they must win to still have a shot in a potential playoff spot. They should be ready to go for another win next week.

Not Everything is About Winning 27 World Series

What are the Euro 2020 Guidelines on COVID-19 Schedules