Watching episodes of “The Last Dance” these past few weeks has been fulfilling for me in a way that was quite unexpected. Of course, we’re all finding ourselves starved for sports right now - the community it builds, the feelings it evokes, the memories it brings to light. In this moment of contemplation that we’ve all been forced into over the last seven weeks, I unburied an old, water-damaged photo that shows a brief moment of human connectedness, except this moment happened to be with the man that was beyond superhuman to many of us in the ’90s and to this very day.

In the early '90s I had the unique privilege of working with a dear friend, Pastor John Love, the Chaplain of the New York Knicks, who still works with the players to this day. Having just completed my own seminary studies, I was assisting Pastor Love in any way I could, setting up and breaking down the chapel, letting players know when chapel services were starting, getting to lead service here and there when an emergency came up – basically any way I could make myself useful as a 25-year old that had been gifted this extraordinary access to the Knicks, watching games from the floor of the Garden. 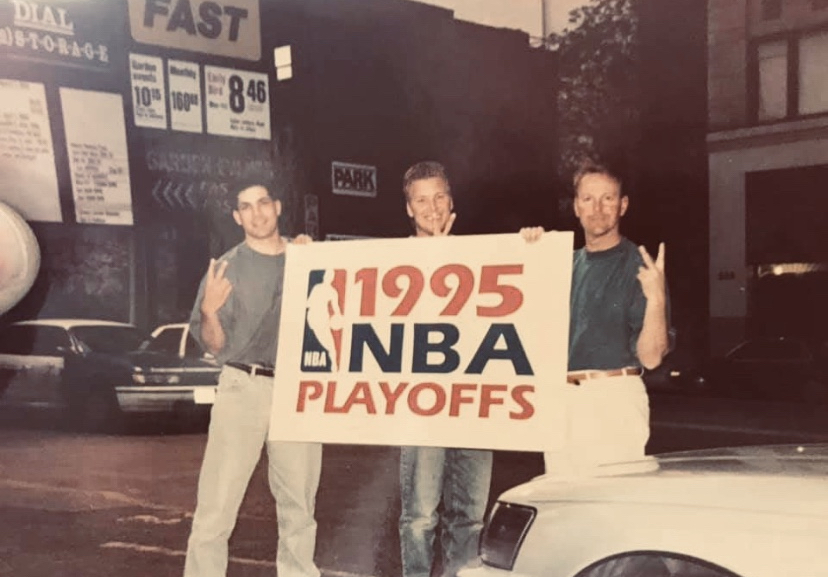 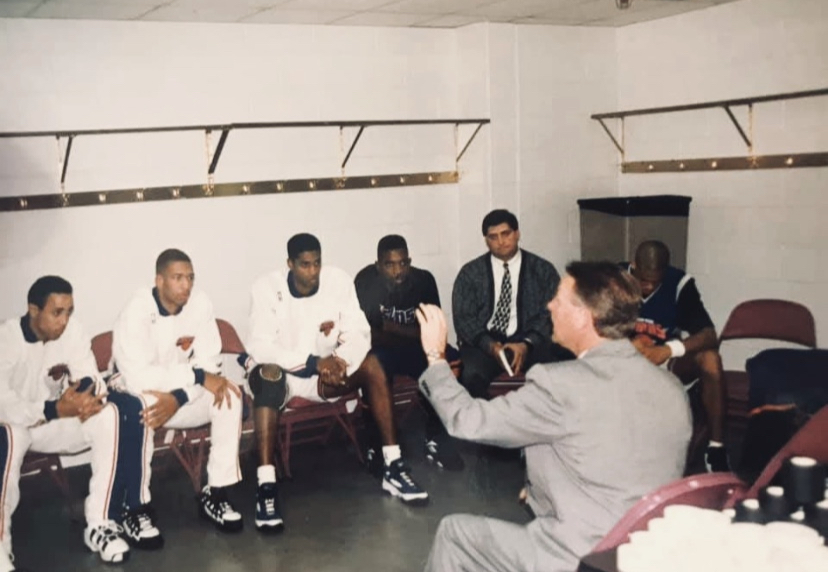 I don’t know how many games I saw during those years, more than I can remember, but the Jordan nights were like no other. Yeah, we had Ewing, Mason, Rivers, Oakley and Starks, but this was Michael. And while he may have lived in Chicago, he owned NY and there was nothing bigger or better than Michael Jordan at the time. When the Bulls were in town, the Garden was electric – the only word you could use to describe it. The sights, the sounds, the celebrities – Don King, Mike Tyson, Cindy Crawford, Matthew Broderick, Spike Lee, Madonna. It was as if there was a giant conduit running through the Garden and we were all a part of it. 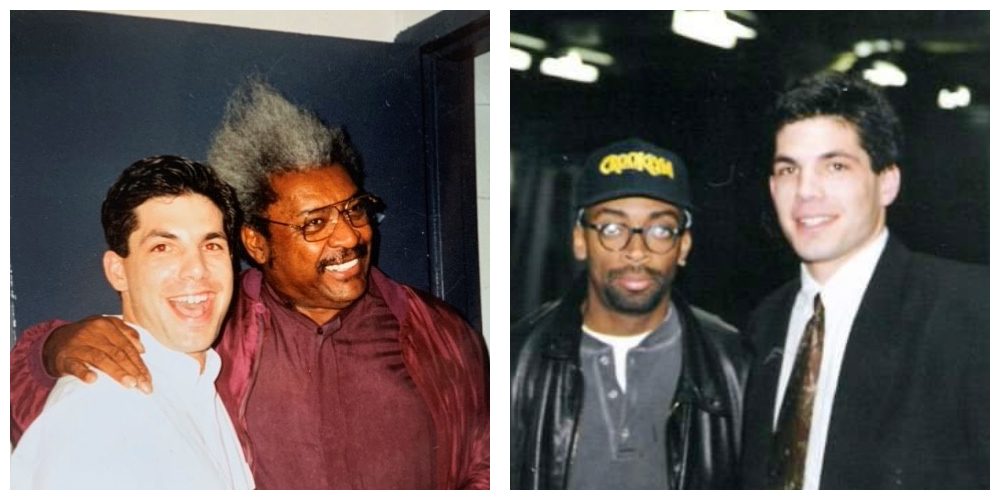 It was the Knicks vs. the Bulls and while I can’t remember the exact date of this particular game, my hair, Nike Air sweatshirt, and Michael’s full leather suit confirm that this was New York in the '90s. A time when “I want to be like Mike” commercials were on a constant loop and Michael Jordan was one of the most popular humans on the planet – everyone wanted a piece of Mike. The spotlight was on him from the moment he left a hotel room to well beyond the paint after he stepped off the court. 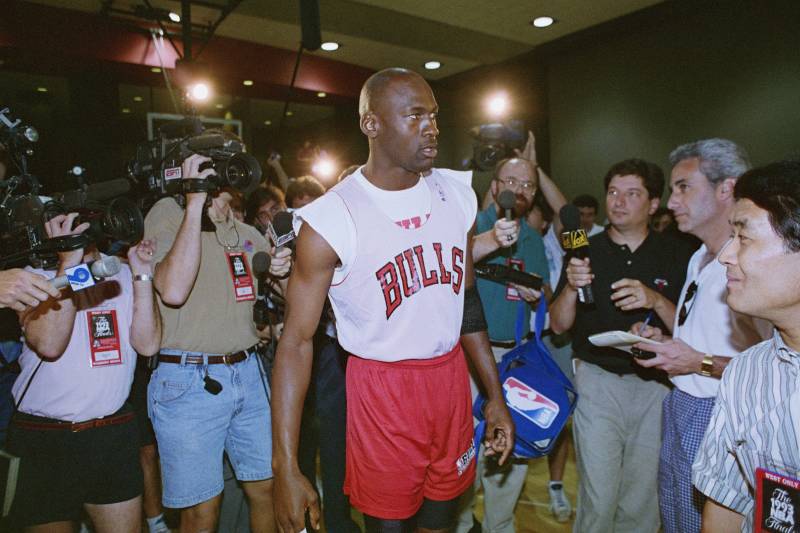 The way it worked back then, when the game ended both teams exited through the tunnel with the Knicks going right and the visiting team heading left. The chapel, which consisted of a few padded folding chairs, cinder block walls, a dropped ceiling, and the less than heavenly glow of humming fluorescent lights, was just opposite the visitor’s locker room. Wanting my own glimpse of the man who was already a legend, I peeked my head out of the chapel door. I was going to get my “Mike moment” if only just to see him emerge and disappear. While Phil Jackson, Scottie Pippen and Horace Grant exited - all legends in their own right - the volume maintained a steady seven. Players that I adored now only served as obstacles to my not promised view of Mike. Suddenly, the volume went to eleven. Michael walked out of the locker room and mayhem ensued - forty reporters running down a six-foot-wide tunnel, yelling, “Mike, Mike, Mike, Mike” with cameras shuttering and blinding flashes, just as portrayed in every other scene of the documentary. I could have just as easily been watching a mass of people move as one wave down a narrow street in Pamplona for the annual running of the bulls.

With the frenzy moving towards me, I quickly ducked my head back in and closed the chapel door. It didn’t look like I was going to get my glimpse of Mike after all.

As I got back to work breaking down chairs, I heard the click of the door quickly open and shut. I had my back to the door but assumed a player had just popped in to grab something left behind. As I turned to see who had just entered, I noticed a player sitting in a folding chair with his long arms resting on his knees and his head in his hands. It seems I startled him as much as he surprised me. It was then that I made eye contact with my hero, Michael Jordan - my Elliott and E.T. moment. I’m pretty sure I left my body in that surreal minute, but with awkward “heys” exchanged, I quickly felt the need to justify my having been a witness to this private moment and explained that I was with the Chaplain program. He nodded and I felt compelled to break the even more awkward silence by telling him, “It’s crazy out there!” As if for a moment he didn’t know the obvious and didn’t live that every day. He replied kindly, “You have no idea. I just needed a minute to think.” I told him “No problem” and went back to quietly busying myself with the chairs while he lowered his head back into his hands. After another minute he asked me where I was from. I told him Baltimore and he said, “That’s a decent drive.” I answered, “Not so bad.” He then thanked me for letting him sit and said, “Well I guess I better do this.” He got up, moved towards the door, and as soon as the door cracked an inch, the yelling and insanity started up again as he made his way to the official press conference.

In that small, quiet room – only a few feet from the pandemonium awaiting outside - I shared the most intimate moment I never expected to have with the greatest athlete on the planet. I only wanted a glimpse and here I was in a grey cinder-block room with a man that emanated life, persistence, drive, motivation, and colors far beyond Tar Heel blue, black and red.

I quickly found Pastor Love to fill him in on my encounter with greatness. As we walked together to the arena exit at the end of the tunnel that led to the employee entrance on 8th Avenue, Michael walked out of a side door. Recognizing this fleeting opportunity, I quickly caught up and began walking beside him – my three hurried steps to his one, elegant stride. Pastor Love said, “Hey, quick pic, Mike?” Michael stopped, looked at the camera, and turned to me and said, “You owe me,” before continuing our walk towards the exit. Pastor Love gleefully relayed the message, “Jordan said you owe him!” – and we cracked up. 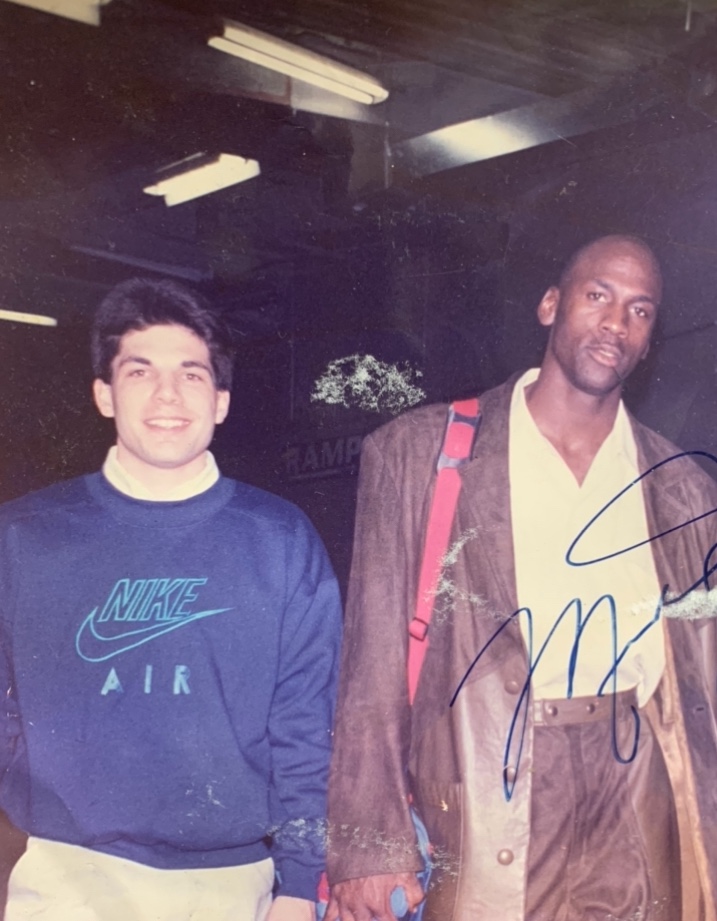 Pastor Love had the photo signed for me and all these years later, in this unprecedented moment we find ourselves in, I am forced to seek presence in even the unexpected moments. Unexpected moments like the three minutes I shared with my superhero and had the chance to feel like I was part of something far bigger than me. I was simply privileged enough to be a kid in a chaplain program in the ’90s and our paths crossed for a moment in time. I still talk to Pastor Love and we reminisce about bearing witness to something so incredibly special but not always being able to recognize it in the moment. Pastor Love said just the other day, “Even I forget those days.”

It’s been interesting to reassess my experience through the lens of this documentary. Now, 25 years later, I find myself thinking about what was relevant when I was a young, newly graduated seminary student. It seems we lose sight of some of those significant moments as we learn new relevances along the way. What this picture reminds me of in that quiet moment shared between two human beings is simple, we are all playing on the same court of life. We’re working through it together. Some of us may touch the sky, but ultimately, we all take off from the ground. Michael set the stage for players like Kobe Bryant, LeBron James, and others who championed the importance of how you interact and connect with people on a human level. Even when that individual appears above all and superhuman. In times like these, those shared human moments are what will always be, most relevant.

"More than Just a Logo"

Warren Hemenway, a life-long sports fan, currently resides in New York City where he still cheers on the Knicks and Mets, but remains true to his Baltimore roots, proudly wearing Ravens’ purple and black every Sunday.