The Greatest NBA Players of All Time

There has been much conversation this year about how LeBron James is the greatest player in the history of the National Basketball Association. Most of the discussion centers around a comparison between “King James” and the great Michael Jordan. The debate rages almost daily but unfair to some of the other all-time greats is the fact they aren’t thrown into the mix.

If you had to answer the question “if you could start a basketball team centered around one player, who would it be?” who would you choose? It seems when talking greatest ever some men are left in the dust of James and Jordan. What about Kareem Abdul-Jabbar? After all, he is still at the top of the list for most points ever with 38,387 although LeBron James is closing in now just 4,146 points behind. Michael Jordan finished his career with 32,292 points.

I believe these players need to be in the mix of discussing the greatest ever. Jabbar, Larry Bird, Magic Johnson, Kobe Bryant, Julius “Dr. J.” Erving, Wilt Chamberlain, Bill Russell, and Oscar Robertson. There are still many more great players in their own right but these men were either a dominant factor or contributed in such an influential way they belong in the top 5-10 of greatest ever.

What criteria would one use to determine who is the greatest player in NBA history? While Michael Jordan may not be the points leader throughout history, his style of play is what primarily puts him near the top if not #1. Michael Jordan was probably the most exciting player to watch in the history of the league rivaling Dr. J. for the role of Mr. Excitement. Jordan had the rare ability to excel in every facet of the game and that might be the one fact that separates him from LeBron James.

Of the aforementioned names, the discussion turns to lifetime stats, and breaking those down might give some clarity as to who are the best players to ever take to the hardwoods of the NBA. Here are the lifetime stats of the names mentioned above. I’ve highlighted who leads in each of the categories listed. 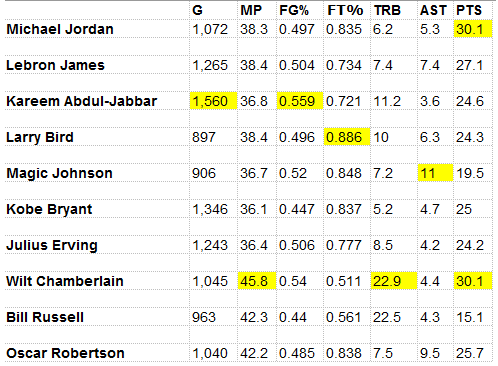 Right away you notice that Wilt “The Stilt” Chamberlain has the highest marks in three categories. Keep in mind that this is the only man in NBA history to score 100 points in a single game. What sets Chamberlain aside from the others is his dominance. Perhaps it was his size and in his heyday, not many players could match him for the bulk and height he carried. Chamberlain was a beast with massive strength on the court. He could enforce his will on anyone.

Tying Chamberlain’s 30.1 points-per-game is Michael Jordan and LeBron James trails those two by three points. Therefore, how can he be considered better than Jordan or Chamberlain? Then you have Kareem Abdul-Jabbar with his infamous “Sky Hook” that seemingly no player could defend against. That shot is most of the reason for Jabbar’s leading field goal percentage among this group.
As you can see above, LeBron James does not lead in ANY category. So why is he considered to be one of the top two players of all-time? If you are building a team around one player, Magic Johnson might the man for the job. Magic could do it all and his passing abilities were uncanny but rivaled by Larry Bird. Those two met in the NCAA title game before making it into the NBA and that spawned a long and historic rivalry. Both could make passes most men could not.

As Bill Russell is listed above he is included here primarily based on his defensive abilities. He and Chamberlain had many head-to-head battles but Russell posted the lowest point average among this group. Magic Johnson averaged the most assists and he was more of a team player who was not interested in trying to be a point-scoring leader. But as a center point of building a team, he might be the best suited for that in history.

Given the stats, and after reviewing them, would you still say LeBron James is the best ever? For me, it is Wilt Chamberlain. In trying to determine who the best player ever is in any sport, I believe you can only ponder how those men did against their peers. With Wilt Chamberlain’s physique and athleticism, he is a man who could have played in any era. I believe he would be just as dominant no matter when he playing in the NBA.

If I had to rank the men above from greatest on down, this is how I would do it: