Are We Seeing Big Ben's Final Days in the NFL?

As of this writing, the Pittsburgh Steelers are mired in a three-game losing streak after having won the first 11 games of the season. When they were 11-0, the Steelers had the look of a Super Bowl contender. Now, they are playing like a last-place team and while having already qualified for the playoffs, most prognosticators are indicating it will be a one-game exit for Pittsburgh once the postseason gets underway.

There is a multitude of reasons for why the Steelers have lost the last three games but the most glaring observation is the play of quarterback Ben Roethlisberger. Having missed nearly the entire season in 2019, the year before in 2018, Big Ben was mulling retirement. But he opted to play another season only to suffer an elbow injury that ended his season prematurely last year. Roethlisberger did not want to end his career in that fashion so he came back this season with all indications he would play into 2021 and beyond.

Given his performance in the second half of the season, eyebrows are being raised around NFL experts and fans as to the possibility that Ben Roethlisberger has finally reached the end and his former skills have eroded to the point, he can’t be an elite quarterback anymore. In the most recent loss to the Cincinnati Bengals in which the Pittsburgh Steelers were humiliated and embarrassed, Big Ben looked like a shell of his former self.

Roethlisberger did manage to reach 60,000 yards passing in that Bengals loss which is just another milestone in his Hall of Fame career. Only Drew Brees, Tom Brady, Peyton Manning, Brett Favre, Philip Rivers, and Dan Marino have passed for more yards. Ben Roethlisberger has had one hell of a career. Just look at his standings in some major passing categories: 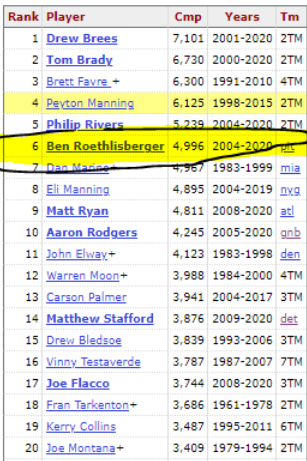 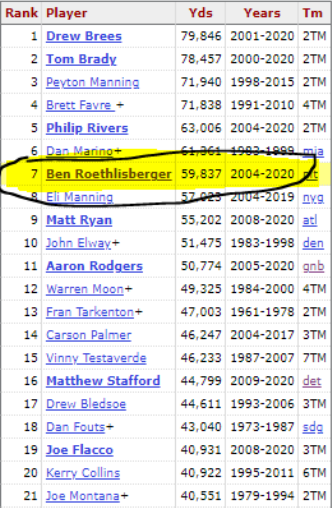 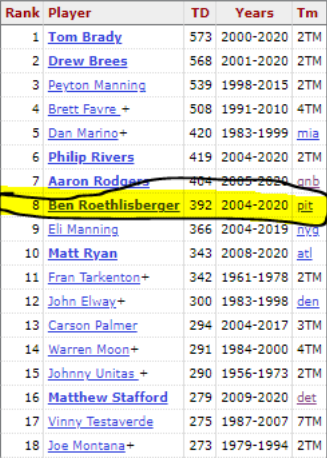 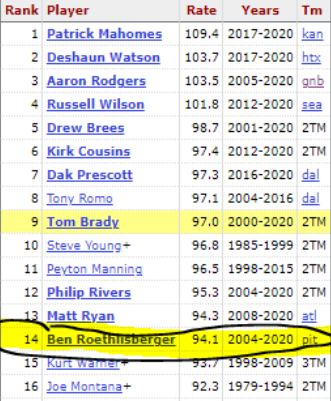 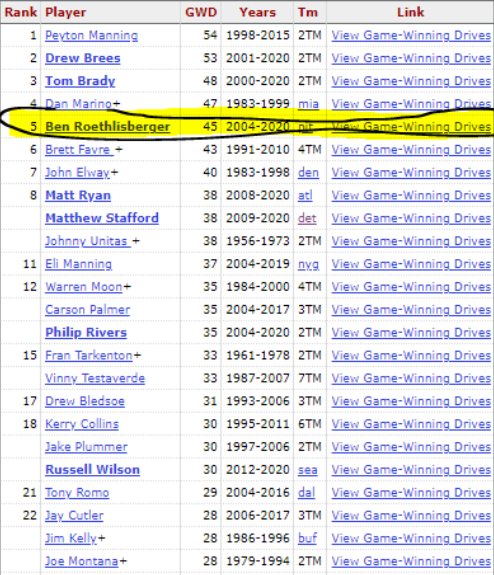 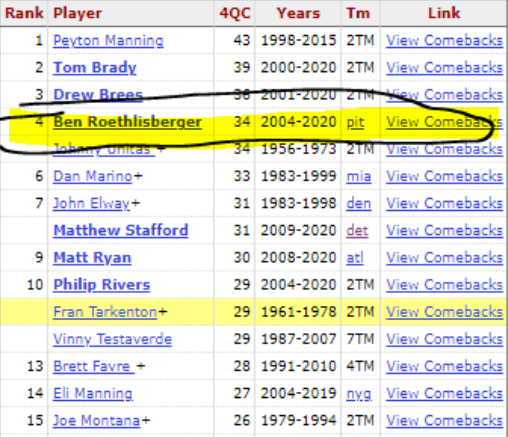 A man considered to be one of the best all-time is Joe Montana and look at how many categories Big Ben is ahead of him in. Roethlisberger is also just two Super Bowl titles shy of Montana.

But it is this season that has suddenly cast doubt on Roethlisberger’s future. Big Ben is falling and fading fast. Whether he can regroup in the last two regular-season games and playoffs remains to be seen but the massive problem for Mike Tomlin and the Steelers is if Roethlisberger is done, who becomes his replacement?

Some outstanding quarterbacks are heading to the NFL draft in 2021 but the Steelers will have no chance of drafting any of them unless they make some ridiculous trade to move their position to within the first five overall picks. That won’t happen so is it possible Kevin Colbert could work a trade for the beleaguered Carson Wentz or possibly Sam Darnold? Forget Mason Rudolph. He’s serviceable but not a franchise-type QB. Then there is Duck Hodges but he too showed his flaws in relief last year and is not the answer.

In going a step further and breaking down Roethlisberger’s season game-by-game in 2020, it’s shocking how fast and far he has fallen in a short period of time. In a comparison between the first nine games, all won by the Steelers versus the last five games in which Pittsburgh has lost three of those, the numbers from Ben Roethlisberger are eye-opening. It’s one thing to slump for a game or two but Big Ben has seen his numbers decline in the last five.

The Steelers' most recent loss to Cincinnati is a far cry from their meeting on November 15th when Pittsburgh pounded the Bengals 36-10. Big Ben had a great day with 333 yards passing, four touchdowns, and a passer rating of 110.1. The season opened with Roethlisberger throwing for three scores against the Giants and his rating was 117.8 Through those first nine games, the Steelers quarterback passed for over 300 yards three times and had 22 touchdown passes. His average yards per completion was 7.2. In completing 67% of his passes in that span, he threw just four interceptions and was his overall quarterback rating came in at a 104.1 mark.

Because of COVID-19 and especially how it affected the Baltimore Ravens, the Steelers' schedule at the end of November and into this month became jumbled and a nightmare for Pittsburgh. Forced to play four games in 23 days, in a road game at Jacksonville, the Steelers looked they might finish the season undefeated after rolling the Jaguars 27-3. But the next game against Baltimore marked the turning point that sent the Steelers spiraling downhill.

The Steelers won that Ravens game but only by a score of 19-14 and they struggled. Ben Roethlisberger threw the ball 51 times, the most he had done all season to that point. Big Ben’s rate dropped to 81.0 for that game and his yards-per-completion went down to 5.2. Then the doors fell off the Steelers vehicle when they faced The Washington Football Team just five days later.

The undefeated season ended with a 23-17 loss to Washington as Roethlisberger had to take to the air often with 53 attempts and a slightly better rating of 82.7. The loss took its toll on the Steelers and their quarterback because a week later on national television, the Buffalo Bills manhandled the Steelers winning 26-15 while watching Big Ben have one of his worst games of the season finishing with a QB rating of just 65.9, throwing two picks, and failing to throw for more than 200 yards (187).

Thinking the Bengals game would be a cure-all, it was absolutely the opposite especially for Ben Roethlisberger. He had the worst first half in his 17-year career and despite improving a bit in the second half, he looked like a shell of his former self. The receivers take some of the blame for a few dropped passes but it was Roethlisberger who was missing targets while completing just 20 of 38 passes for only 170 yards. There was just one touchdown pass, and one interception, one sack, and two fumbles one of which became a turnover.

The Bengals scored 17 points off of turnovers in the first half and for Big Ben, most of the blame went on his shoulders. But Cincinnati also came out and punched Pittsburgth in the mouth and Pittsburgh was never able to answer back. A better way to realize that Big Ben is not the same player is to look at the overall numbers of the first nine games and the last five.

From game one through game nine, Ben Roethlisberger completed 67% of his passes. In the last five, that number dropped to 63%. From opening day until the game with the Bengals in November, there were 22 touchdown passes from the hands of Ben Roethlisberger and just four interceptions. His average passer rating was 104.1
From November 22 until this Bengals loss on December 22, Roethlisberger has thrown just eight touchdowns in five games and has thrown six interceptions. His yards-per completion has dropped to a 5.3 mark. But more concerning is his passer rating which has dipped to an average of 76.34 during this current slump.

What does it all mean? Ben Roethlisberger is playing poorly but so are other players except for the defense who has been repeatedly put in bad field positions by the inept offense. In football, though most of the responsibility especially on offense falls on the quarterback’s shoulders. The Steelers will go only as far as how far Big Ben can carry the offense and right now it looks like he is failing at doing that.

In some ways what Ben Roethlisberger is going through reminds me of what the baseball playing Pittsburgh Pirates former pitcher Steve Blass went through way back in 1972. Having been one of the Buccos best pitchers for a long time, like a flash of light, all the sudden Steve Blass could not find home plate. He tried everything to correct any issues as to why he could no longer pitch effectively and all failed. He quit baseball after numerous attempts to find his best skills. Now Ben Roethlisberger seems to just have had his abilities vanish into thin air.

Again, the dilemma for the Steelers is who is next after Ben Roethlisberger? It’s not a good problem to have especially without a franchise-type guy currently on the team. The next three weeks could easily determine Big Ben’s future and I believe if somehow a miracle happens and Pittsburgh reaches the Super Bowl, with a win he would retire to go out on top. A loss and he would probably come back. But that possibility does not seem like reality and so if he continues to play this poorly and the Steelers get bounced in the first round of the playoffs, I think if he does not retire, the Steelers might begin to push him in that direction and try to encourage him to call it a career.