How I Won a Storm Crux Prime for Ten Dollars, Storm Ball Beat Your Average Challenge

I checked my email last Friday (February 22, 2019) and there was something from USBC Marketing. Besides the fact I bowl in a league on Friday nights, I felt obligated to open the email because the title read "Storm Ball Beat Your Average Challenge (2 Ways to Win a Storm Ball)". Who has two thumbs, likes a good challenge, and especially loves free stuff?! Well... me.

They offered two ways of winning the Storm Crux Prime, a ball valued at $175:

I figured since I was going to be bowling that evening, I would invest the $10 into the XBowling app and give it my best shot. The best part is that it was super easy. I put the $10 into my XBowling account with a debit card, pretty standard. Then, I used the $10 I deposited to enter the contest. It was at this point that I discovered XBowling was about much more than the Storm Ball challenge that brought me there.

Beyond the special Storm Ball Challenge, I could enter into other contests, including but not limited to:

So, after all of my perusing around the XBowling app, I put in for the Storm Ball Challenge and a Strike Pot Challenge. If I'm being honest, with my 167 average I felt that both of these were equally as difficult going in, but that proved to be untrue.

The thing with the Strike Pot Challenge is that if you miss just one of your strikes, you're done and the pressure is off. When I bowl, I'm always trying my hardest. I'm not one of those "sandbaggers," okay? But, I definitely felt more pressure and was laser-focused when I went up for those particular frames that I had to match with XBowling's scorecard. The Storm Ball Challenge was a different kind of monster that required consistency from start to finish across three games.

Something must have got into me that night because I bowled my ass off. In Game 1, I struck the first frame, spared the second, then had five straight strikes. I've probably only done that four or five times in my life. At that point, I pretty much had the 30+ pins over my average in the bag for that game, but I did open the eighth frame. The spare in the ninth put me over the top, and two strikes in the tenth were the cherry on top for a really nice 231 (64 over my average). The second game didn't go as smoothly.

When I started out with two strikes and a spare, I was feeling pretty good about things. The open frame in the fourth kind of scared me. It took me eight frames before I opened in Game 1, so taking a hit on my pin compilation didn't make me feel good. I picked back up with a spare and a strike. But another devastating open frame in the seventh REALLY had me worried. From this point on, I knew that I had to get a turkey to pull off the 30+ pins over my average. A spare in the eighth kept me alive, but I still needed that darn gobbler. I somehow managed to pull it out of my hat with a strike in the ninth, and two more in the final frame. I ended up sneaking by with a 202 (35 pins over my average). Don't get me wrong; that's a really good game. But, it barely got me over the hump for a chance at a $10 bowling ball! The third game in the series let me know that the ball was all but in the bag.

I rolled into the third game with a spare, followed by two strikes, another nine-spare, then three more strikes. At that point, I knew I had it. My ball was reacting perfectly at the end of the lane, landing right in the pocket. Pins were exploding everywhere. I finished the game with a solid 225 (58 pins over my average). 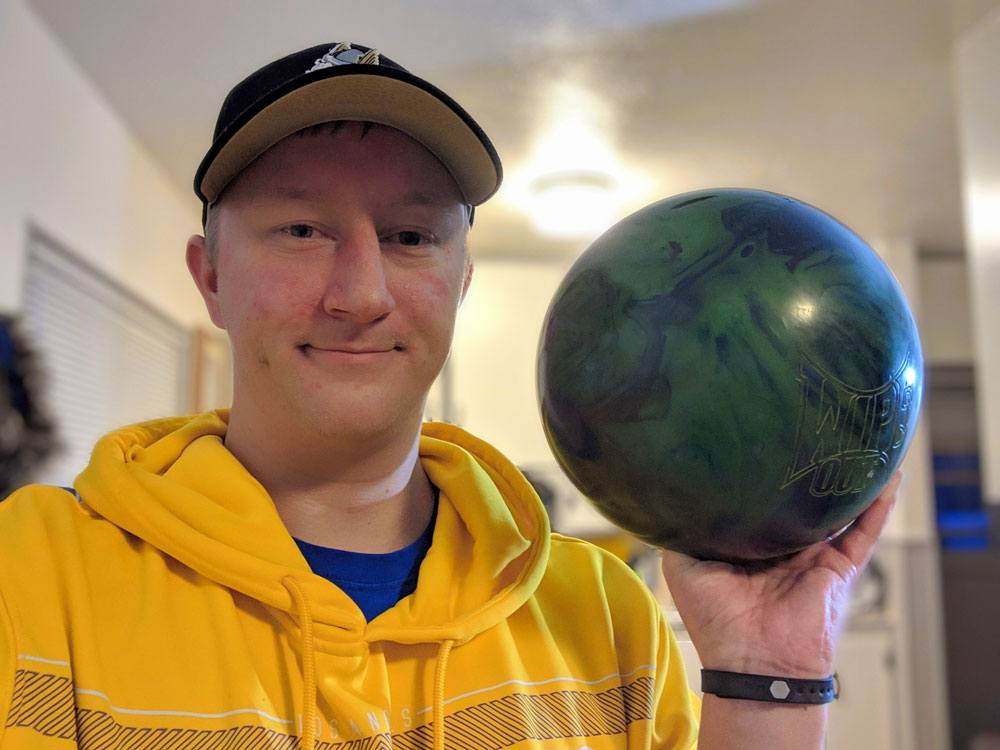 The grand total was in with a scratch series of 658, my second highest series ever. In the second week of the season I bowled a 667, which let me know that this challenge wasn't completely out of reach. When it was all over, I still couldn't believe I had done it. I had left my bowling ball on the return, and forgot to grab my things from the bench in the bowling area! I requested my print out and submitted my scores, still wondering if this challenge was legit or not. Upon submission, I received an email the following Tuesday telling me I had done it.

So, let this story be the one that lets you know this XBowling thing is for real. I look forward to receiving my new ball and potentially giving it a shot at the city and state tournaments. I'll be sure to post a little update when I receive it, and maybe do a little review on the ball, how it differs from my previous ball, and tell you how I like it. I mean, it is practically free, so I'll love it no matter what!

Last but not least, feel free to use my referral code/link when you sign up for your account so I can snag some referral bucks! Just sing up from this link or use code KYLER16 when registering.

I hope some people see this story and are encouraged to try and win some cash and other prizes with XBowling. I know I'm itching to get out there again this Friday to do the same. Good luck to all, and good bowling!