1969: A Noll Arrives in Pittsburgh

For Pittsburgh Steelers fans, 2019 is an anniversary year of sorts. That’s because this year marks the 50th anniversary of the hiring of the late and former Steelers head coach, Chuck Noll. 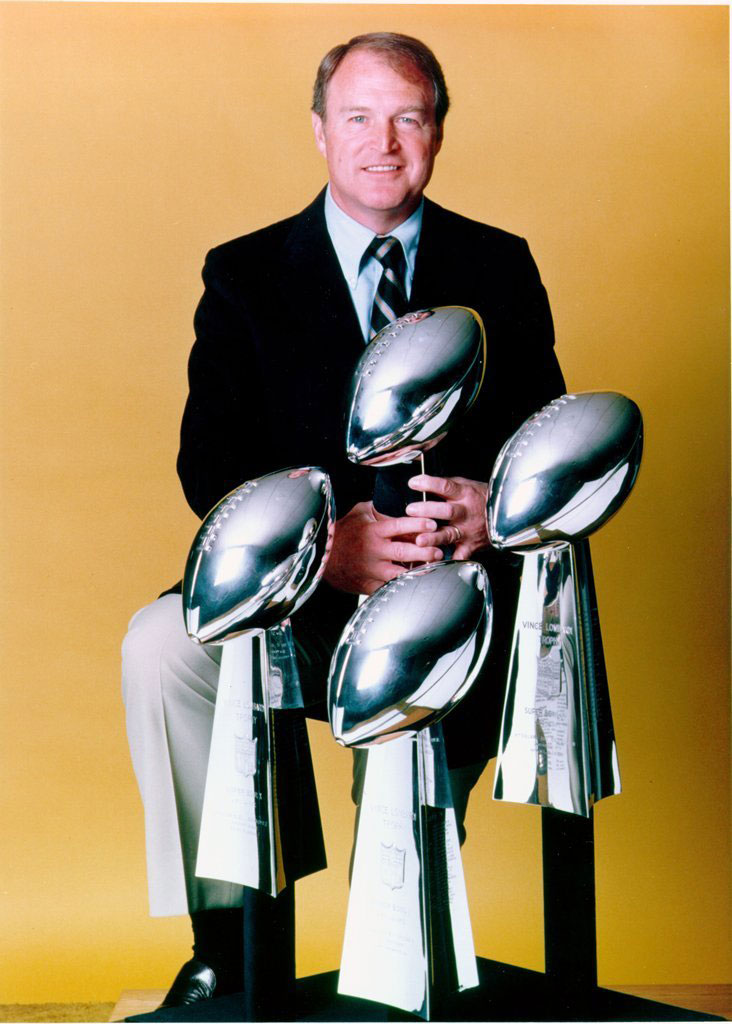 It’s hard to believe it’s been one half of a century ago that perhaps the greatest coach in the team’s history was brought on board. However, it almost didn’t happen. That’s because Art Rooney Sr. had intended on hiring legendary Penn State coach Joe Paterno but he turned down the job when offered.

On the recommendation of the Baltimore Colts head coach Don Shula, Rooney was told he should hire the Colts’ defensive coordinator and backfield coach at the time, 37-year-old Chuck Noll. “The Chief” took the advice and hired Noll making him the youngest head coach in the NFL at that time.

Noll was a hard-nosed coach who led the team with an all-business attitude focusing primarily on building a strong defense. That became obvious with his first-ever draft pick, that being “Mean” Joe Greene who became the cornerstone of some of the greatest defensive teams in the history of the league. 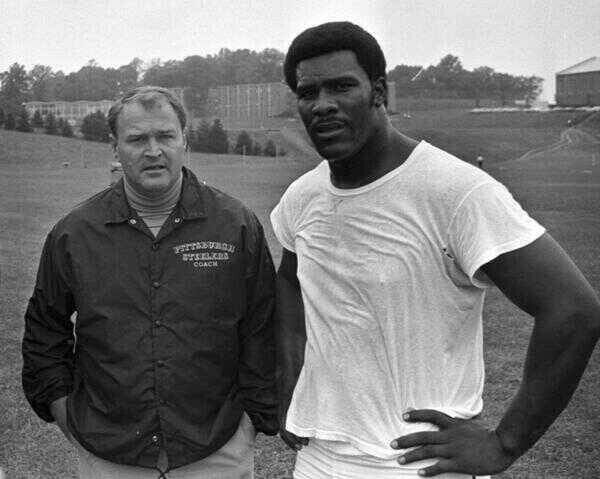 Chuck Noll had a nose for talent and in his years at the helm from 1969 to 1991 he drafted a handful of future Pro Football Hall of Famers:

Noll himself was also inducted in 1993. In 1974, Noll and his staff conducted a draft class that has been called the greatest ever. In that selection process of 1974, the Steelers chose Lynn Swann with their first pick in the first round, 21st overall. Swann became a Super Bowl sensation and inducted into the Hall of Fame. In round two, they found a smallish linebacker by the name of Jack Lambert out of Kent State University. The rest is history as Lambert had a stellar career and became one of the most menacing linebackers ever as well as also becoming a Hall of Fame member.

Incredibly, with the 82nd pick overall in the third round, John Stallworth was there for the taking and perhaps because he came out of a smaller school (Alabama A&M), he was passed by. But he too would finish his career as one of the all-time best at the wide receiver position and earned a yellow jacket at Canton joining Swann and Lambert in the hallowed halls.

Noll and his staff did not stop with Stallworth. Also in the fourth round, they found Jimmy Allen, a good defensive back who didn’t reach the talent levels of the men chosen before him. Round five saw Pittsburgh finding a needle in a haystack as unbelievably, Mike Webster got passed by time after time team after team. The Steelers happily drafted “Iron Mike” and he would put together a career that may have made him the greatest center in the history of the game. So not just Swann, Lambert, and Stallworth one day being inducted into the Pro Football Hall of Fame, so was Webster giving Chuck Noll four inductees from one single draft class. That had not been done before Noll or has since.

In Noll’s rookie season as head coach, it was a rough start. The team finished with just one victory and that came on opening day when the Steelers defeated the Lions 16-13. The points the team’s defense held Detroit to became the number of losses they would finish with. 13 consecutive losses did not worry Noll. He knew he was building something special.

The next season in 1970 produced an additional four wins but it took the Steelers four more games to get Noll just his second NFL victory, this one coming against the Buffalo Bills and it was a good win, 23-10. The season concluded with three straight losses and a 5-9 record, but Noll kept the faith. A season later it was an improvement albeit by just one game (6-8 finish) and while it appeared Noll and the Steelers were taking baby steps to become winners, the reputation of being a losing team year after year had not yet diminished.

Little did anyone know how special 1972 would be. From losing eight games the year before, all a sudden the Steelers erupted in the AFC Central and won 11 of 14 games and for the first time in their history…they made the playoffs. All the pieces of the puzzle, the players Noll had drafted since 1969 molded together to create a formidable team that in making the postseason for the first time was a legitimate threat.

The Pittsburgh Steelers have always been built primarily through the draft but Noll had a nose for talent. From 1969 to 1972 he found through the selection process not just that elite class of 1974 but men like L.C. Greenwood who lasted until the 10th round of that first class for Noll perhaps again because he came from a small school named Arkansas-Pine Bluff. Jon Kolb, a muscular offensive lineman who became a staple on the front lines of the offense was also in that ’69 class.

If not for the drafting of Terry Bradshaw in 1970, then maybe Terry Hanratty would have been the quarterback of record for the Steelers as he came in just one year before. As Bradshaw became the NFL’s overall #1 pick in 1970 thanks to the winning of a coin toss between George Halas and Art Rooney, it was Pittsburgh not Chicago who landed “The Blonde Bomber.” But joining Bradshaw in his class was yet another Steelers future Hall of Famer, Mel Blount.

1971’s draft would turn out more gems for Pittsburgh. Can you say “Jack Ham.” How about Dwight White? “Mad Dog” was also a 1971 draft alumnus. So was Larry Brown, originally a tight end converted to an offensive tackle. Mike Wagner might not have a bust in Canton, but he was an outstanding safety also drafted in this class. Wagner who played out of Western Illinois University lasted all the way until the 11th round of the draft.

As unthinkable as it sounds, while there were not four Hall of Famers like the 1974 class, 1971 may have been an overall better draft. That’s because not just the names mentioned above came to Pittsburgh but also drafted that year were Gerry “Moon” Mullins, Frank Lewis a very good wide receiver who was actually the first-round pick, and “Arrowhead” Ernie Holmes.

1972 was a bit of a down year for the draft given the success Noll had up to that time but still he found some great players who had a major impact. First and foremost was the number one pick, Franco Harris would be the hero of 1972 with his “Immaculate Reception” game-winning touchdown over the Oakland Raiders in the opening round of the playoffs. Joining Franco in 1972 were Steve Furness and “Jefferson Street” Joe Gilliam. Gordon Gravelle was a decent player as was backup linebacker Ed Bradley. 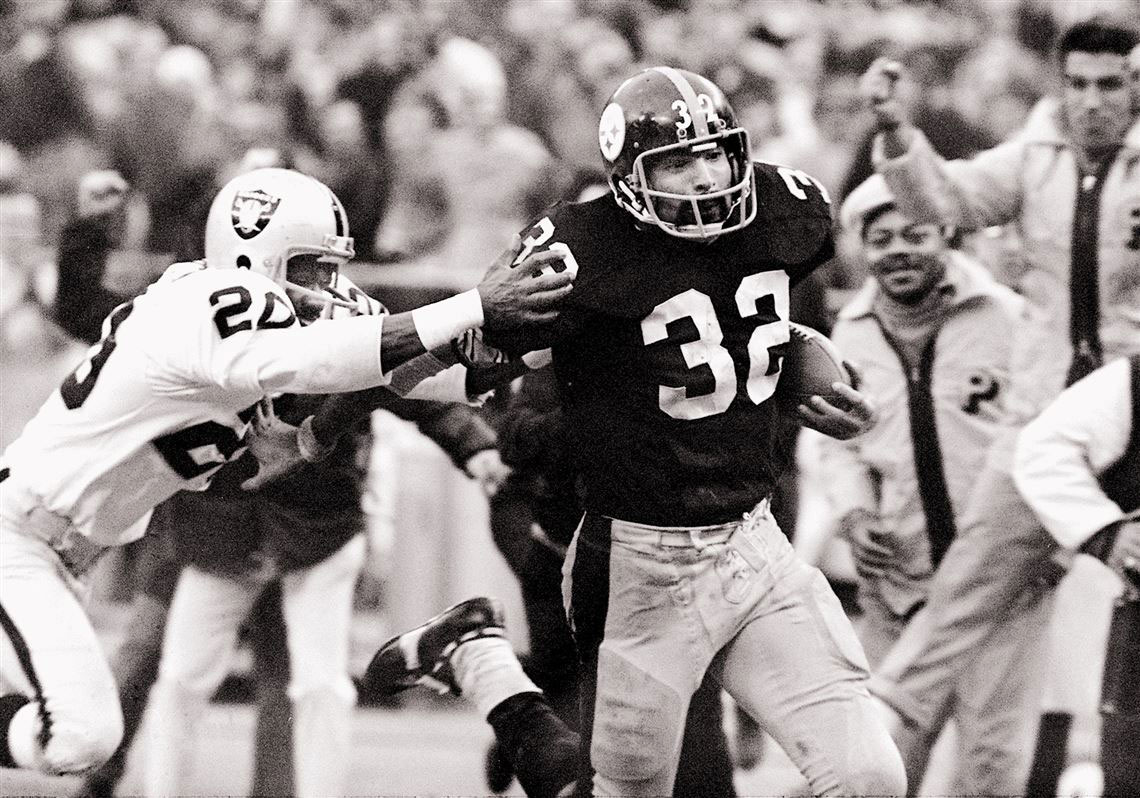 All these men along with others who made up that 1972 team put it all together that season and lost just three games in the regular season to the Bengals (15-10), Dallas (17-13), and Cleveland (26-24). None of those losses were back-to-back, and the Steelers had streaks of five and four victories, those final four to finish the season. The Steelers obviously won the AFC Central division and faced a bitter rival in Oakland in the first round of the playoffs, their first postseason game ever.

Heading into the fourth quarter of that game in Three Rivers Stadium, Oakland had the lead by just a 7-6 score and with barely any time on the clock, Terry Bradshaw threw a pass downfield that was intended for John “Frenchy” Fuqua but instead the ball deflected into the air where rookie Franco Harris made a shoestring catch and ran it downfield for a game-winning touchdown now known as “The Immaculate Reception.”

That play has often been voted as the greatest play in NFL history but it swirls with controversy because Raiders supporters will tell you the ball hit Fuqua which by NFL rules of 1972 would have made that an illegal pass because a ball was not permitted to hit an offensive player and then advanced by another offensive player. Fuqua has yet to this day to reveal who the ball hit (even if he can remember because he got blasted by Jack Tatum which Steelers supports believe was the source of the deflection).

Either way, the Steelers won the game and in the next round they faced the unbeaten Miami Dolphins only to lose by a close score of 21-17 as Miami would go on to remain undefeated and beat the Washington Redskins in the Super Bowl to become the only team in history to finish an entire season unbeaten and win the league title. But this was just a preview with what was about to come in ensuing seasons.

In 1973 Oakland and Pittsburgh met once again in the playoffs this time the Raiders made sure they won the game without any question taking it by a final score of 33-14. But then came 1974 and Lynn Swann’s rookie season as well as Lambert, Stallworth, and Webster. Along with those four, the Steelers finished 10-3 and advanced to their first Super Bowl ever beating Minnesota for their first of six Lombardi’s 16-6.

Pittsburgh repeated the next season one of a few teams to win back-to-back Super Bowls. They probably would have won it again in 1974 if not for playoff injuries to Franco Harris and Rocky Bleier that sidelined them for the playoff loss to Oakland. There has never been a team that won three straight Super Bowls, but the Steelers nearly came close.

After a two-year absence from the big game, the Steelers were back in it in 1978 again winning the Super Bowl twice in a row. Chuck Noll became the first head coach to win four Super Bowls and that 1979 championship team would be his last. In 23 years as head coach of the Steelers, Chuck Noll’s teams made the playoffs 12 times including eight straight seasons when Pittsburgh won four Super Bowls in six years.

Here’s some food for thought…since 1969 when the Steelers hired Chuck Noll, there have been just two other head coaches that followed in his footsteps. Bill Cowher and Mike Tomlin. That’s three head coaches in 50 years! To appreciate that fact more, let’s take the Cleveland Browns. Since 1969, the Browns have gone through 15 different head coaches, not including interim coaches who took over until a replacement was found. If you add the replacements that’s another four.

For an in-house comparison, Chuck Noll won 193 games for his career with the Steelers losing 148 and tying once. That’s 342 games and a winning percentage of .564. Bill Cowher would coach from 1992 to 2005, win one Super Bowl, and post a record of 149-90-1 equaling 240 games coached. His w/l percentage was .620. Then came Mike Tomlin who beat out Russ Grimm and Ken Whisenhunt for the job and all Coach T has done is win. Through his first 192 games, Tomlin’s teams have won 125 of them giving Tomlin a winning percentage of .651 the highest of the three coaches since 1969.

In Bill Cowher’s 15 seasons, his teams made the postseason 10 times including his first six on the sidelines. Tomlin has been to the playoffs eight times in 12 seasons so for the critics of Mike Tomlin, you have to give him credit for his record and having won a Super Bowl as well as being there for two.

Add up the wins and losses for the three coaches Pittsburgh has had since 1969 and you get a record of 467-304-3 and a won/loss percentage of .603. In the last 50 years, the Pittsburgh Steelers have made it to the postseason 30 times, won the Super Bowl six times, and made the Super Bowl eight times. Not too shabby.

The bottom line is that credit must go to Chuck Noll or as the late and great announce Myron Cope referred to him as, “Emperor Chaz” for the winning attitude and foundation of how to build a winner in Pittsburgh a trend that began in 1972 and despite some off-seasons, continues in 2019, 50 years later.