Yeah, I’m one of those guys who participates in my local bowling league. My league goes from September to April so it’s coming to an end very soon. It’s a long league, and some might say that’s a waste of time and money. However, this league is a great way for me to fulfill that need for competition in my life while hanging out with good friends and family at the same time. Also, the quest for the perfect 300 game is something I enjoy. Some people like to just bowl for fun, but in a competitive league with cash prizes at the end, I’m always trying my best to string 12 strikes together each and every game.

Every February, registration begins for the annual city tournament. I wasn’t sure if I’d be able to get a team together until I texted my buddy Mike to see if he was interested. His quick response of “hell yeah!” let me know that we’d have no trouble getting five people for our squad. We were set to bowl on Sunday, March 19th.

If you’re not familiar with bowling, you probably don’t know the difference between “scratch” and “handicap” scores, so let me explain. A bowler’s scratch score is the base score without a handicap. Essentially, it’s the score you would see on the screen when you’re bowling for fun; it’s the score everybody knows about when they bowl. However, a bowler’s handicap is based on 200 pins. For example, since I have a book average of 160, my handicap is 40 pins, which is the difference between 200 and my average. Say I averaged 200 pins per game in my city league, I would be considered a “scratch bowler” because I wouldn’t have a handicap. What does this mean? Basically, every game I bowl in a handicap event (all events I’ve ever done), I would have 40 pins added to my scratch score. So if I bowl a 200 pin game, my actual score that goes toward the event totals would be 240.

Just to clarify, a perfect game is not about hitting 300 with my handicap. I want to hit 300 straight up, hence needing 12 strikes in a row to get it.

Bright and early that Sunday morning, we arrived at Skyline Lanes for our 8:00 AM bowling shenanigans. We had nine games of bowling to look forward to that day. If we had registered earlier, we could have spread the event over two days, but that wasn’t the case. First up was singles (3 games), then doubles immediately after (3 games with a teammate). After a break to allow the lanes to be re-oiled, we would bowl teams (3 more games with four other teammates). Since it’s a city-wide tournament, my scores from singles would be put up against every other bowler in the tournament for cash prizes. The same for doubles, but our two-bowler score goes against all other two-bowler scores. Similarly, our five-bowler team scores go against all other five-bowler teams.

I started my singles games off strong with a big-time score of 202 (242 with my handicap). Unfortunately, I’m not as consistent as I would like to be so my next two games didn’t go as well. If you look at my average of 160, it makes sense that I probably wouldn’t be keeping those scores up throughout the day. I earned a 134 in game two, then a still-below-average 157 for game three. If I had kept up with scores that reached over my average, I could have been in range to win some cash. 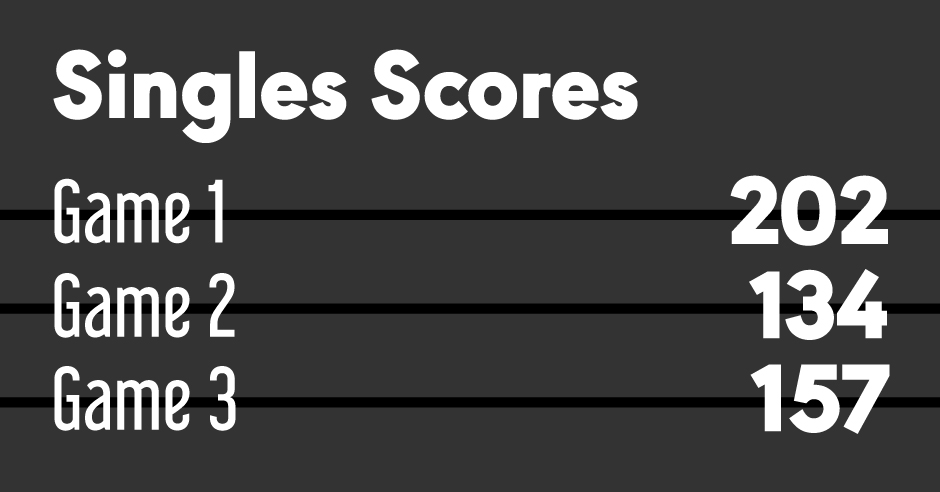 My brother was my teammate for doubles. He came into the tournament with a 171 book average, so it’s safe to say he’s significantly better than I am. His career-high is a 277, so I was more than stoked to have him as a teammate.

I was pretty consistent with my scores for doubles, putting together above-average scores of 168 and 167, with 158 being my only doubles score under average. My brother got progressively better as the games went on, putting up a 157, 174, and 193. We probably needed to bowl a bit better than that to be in the run for the money. 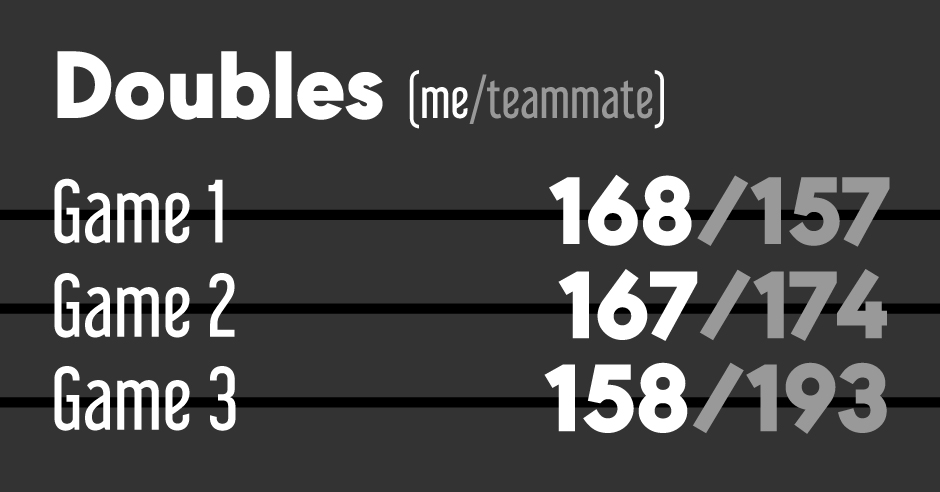 As doubles were being wrapped up, people started streaming through the doors for five-bowler team play. With singles and doubles considered as one event, we had to wait for the lanes to get re-oiled before we bowled teams.

Our five-bowler team consisted of myself, my brother (from doubles), my father, my buddy Mike, and another friend named Shane who bowls with all of us in our normal league.

Although we were bowling against every other team’s scores in the entire city, we were paired up on lane one and two with one of the best teams in the entire tournament. The lowest average on their five-bowler team was 184. The highest on our team was my brother’s 171. Competing against a team of that caliber makes you strive to do your best. They were a great benchmark for us to roll against. Conveniently, our handicap gave us a big advantage against a team full of scratch bowlers. To make the situation even more interesting, we ended up beating them with only our scratch score the first of the three-game series. According to the numbers that was not supposed to happen. We possibly had an advantage since we had six games to warm up the lanes.

For teams, I bowled above average overall with an 186, 169, and only one under average at 155. It’s important to remember that it’s a team effort, so if one person struggles (ahem, Dad), the other teammates can bowl over average to make up for the lost pins. Our team scores through the three games were 872 (way above average), 715, and 780. Keep in mind this is without handicap. After the event was over, we ended up with over 3400 pins with the handicap. The team at the top of the leaderboard had over 3600.

It takes a couple weeks for the city bowling committee to tally up the scores and prep for prize handouts. Our team should find out this week if we won anything. Stay tuned for those results.

Overall, I had a really good time bowling with these guys. In the end, all I care is that I’m having a good time. Obviously, I’m trying my hardest to win the whole damn thing in the moment, but while doing so, it’s important to try and stay positive when you throw a bad ball, and just try to have fun.